Home World Coronavirus erupts in China once more even as ‘Zero-COVID’ policy has already... 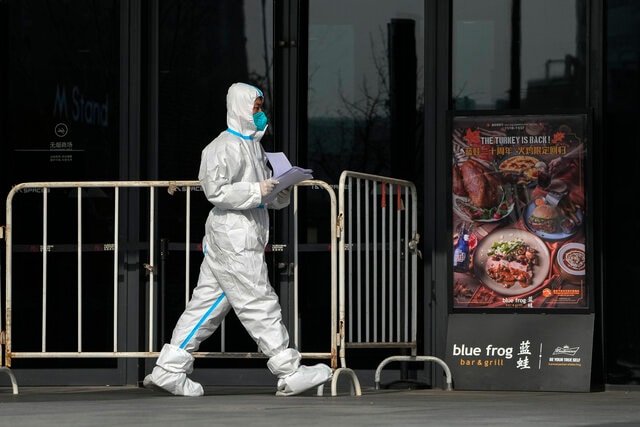 A worker in protective suit places closure notices on the barricaded restaurants at a shuttered commercial office building as part of COVID-19 controls in Beijing, Nov. 22, 2022. AP

Two of China’s biggest cities Beijing and Shanghai have tightened coronavirus rules amid rising cases, once again raising concerns over the effectiveness of the country’s zero COVID policy.

While Beijing shut parks and museums on Tuesday, Shanghai toughened rules for people entering the city.

More than 253,000 coronavirus cases have been found in China in the past three weeks and the daily average is rising, the government said Tuesday, AP reported

Guangzhou city and the southwestern municipality of Chongqing accounted for about half of the total cases.

The local government has asked residents to avoid travel. Anyone entering a public building will have a show negative COVID test which is not more than two days old.

In Shanghai which is also the country’s financial hub, those entering the city may not be able to enter places such as shopping malls and restaurants, within five days of arrival.

According to Reuters, earlier the city had ordered the closure of cultural districts in seven of its sixteen districts after 48 new cases were reported.

Experts told Reuters that the authorities should focus on a booster campaign and awareness campaigns ahead of a complete reopening.

Case numbers have surged across China, with residents in Beijing worried that a record number of new infections will lead to lockdown measures similar to those seen earlier in the year in Shanghai, which lasted for months.

The flare-ups came just a week after China said it would begin rolling back some of the strict Covid rules that have been in place since the pandemic started in 2020, even as the rest of the world has moved on.

News Next Desk - December 6, 2022 0
Rumours have been rife that Shah Rukh Khan is teaming up with Rishabh Shetty, Rakshit Shetty and Hombale Films for a film directed by...
%d bloggers like this: