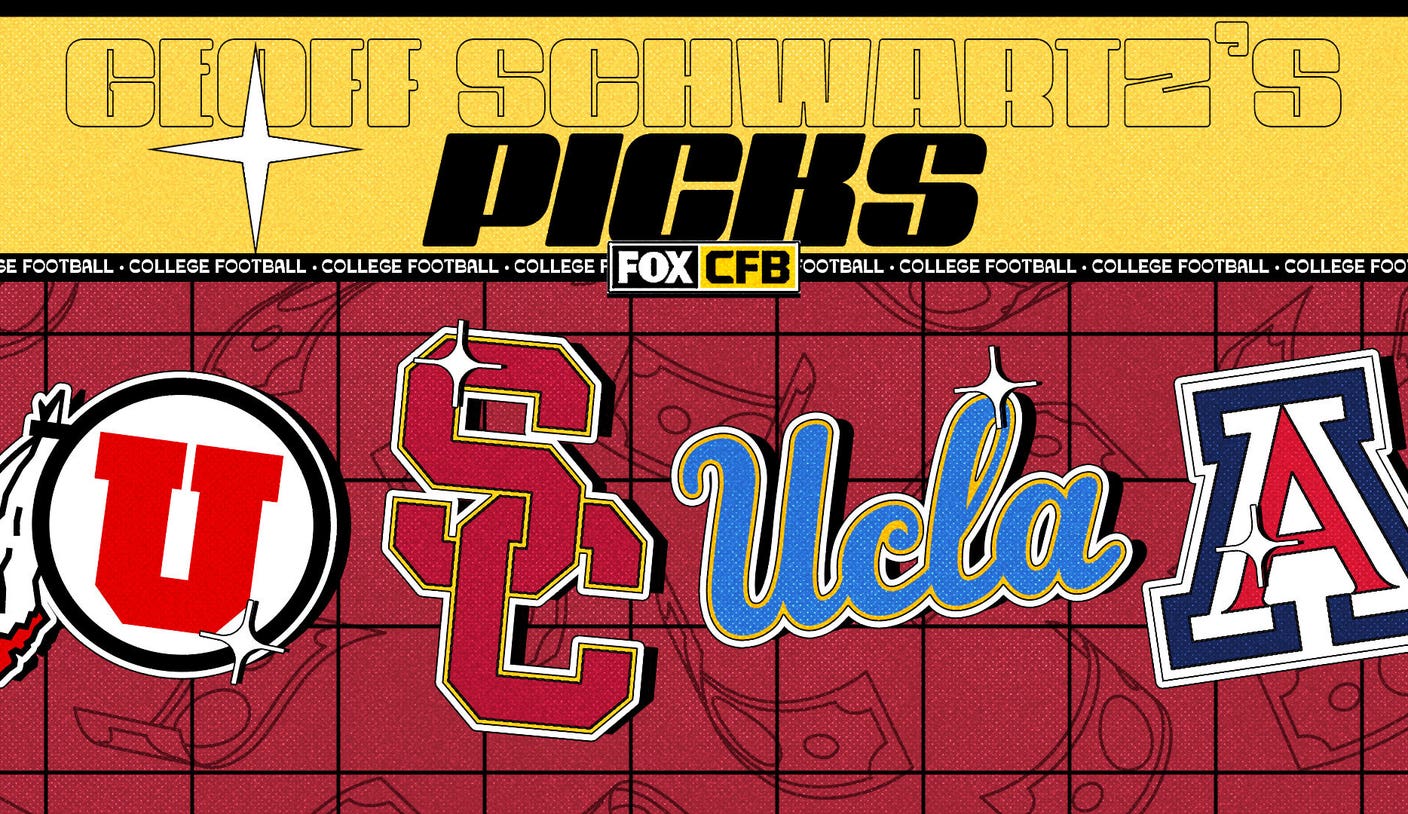 Here we are, folks. We finally made it to the last week of the college football regular season.

After 13 weeks of ball, I’m still excited to see which teams get out there and give it their all.

So for the final time this regular season, let’s dive into my best bets (all odds via FOX Bet).

I’m 36 years old. I’ve watched football since I was five and have been playing competitively at a high level since I showed up at Oregon a month after my 18th birthday. I retired from football in 2016, and since then, I still consume the sport as a fan and watch college and NFL game film.

The Trojans are two wins away from a playoff appearance with an offense that ranks second in points per drive and a defense that’s 104th in limiting points per offensive drive. USC’s defensive line is seventh in havoc rate and has forced 24 turnovers this season — that’s good for a team turnover margin rate of plus 21! It’s nearly impossible to have a defensive line that good with a defense that can force that many turnovers and still be 104th in defensive points per drive. SC has won two games by three points each on the road against ranked teams while forcing four turnovers in each game. There’s no way to explain this success.

Every fiber in my body wants to fade USC, but that has been bad business. The Trojans continue to win and cover, just as they did Saturday night. So the better play is the Over on Saturday when they host the Irish.

Notre Dame’s offense is hit or miss, but against SC, every offense is a hit. Utah scored 43, Arizona 41, Cal’s 95th-ranked offense scored 35 and UCLA — despite four turnovers on Saturday — still scored 45 points. USC has not played a defense like Notre Dame’s in quite a while, but I’m not sure that it matters if Notre Dame is good on defense or not.

USC will score. The Trojans always end up scoring. But is Notre Dame fast enough on defense to keep up? So points will be scored on Saturday. Take the points.

PICK: Over 62 points scored by both teams combined at FOX Bet

The Apple Cup in the Palouse with a 7:30 p.m. local kick — have to love the home Cougars in this spot.

The forecast for Saturday night in Pullman is cold with wet weather, either freezing rain or snow. This is not ideal for Washington’s high-powered passing attack facing the best defense they’ve seen all season. The Cougars are ranked 12th in defensive efficiency and 21st in points per drive. They are equipped to slow down Washington’s passing attack, which we’ve seen is possible when they play better defenses like Oregon State and Cal.

Yes, I am concerned about Washington State’s offense in the cold and wet conditions. The Cougars can run the ball, although they mostly choose to ignore that part of their offense. They have a shaky offensive line which can lead to pressure and mistakes from quarterback Cam Ward.

However, Washington’s defense should not provide much resistance. I like the home Cougars to pull a small upset in this game.

PICK: Washington State (+2 at FOX Bet) to lose by fewer than 2 points (or win outright)

The game formerly known as the Civil War will be a low-scoring affair, and that’s an uncommon occurrence in this matchup.

Oregon State’s defense is legit, and the Beavers deserve more national respect. They rank 30th in points per drive and 21st in passing success rate. They struggle to stop the run, but that hasn’t hurt them much this season. They just don’t allow points.

Oregon’s offense is outstanding, but quarterback Bo Nix is hurting. He gutted through the Ducks win on Saturday, scoring just enough to beat Utah. Without Nix being full speed, the Ducks’ offense is just less explosive, and Oregon State’s defense will be able to slow them down.

On the flip side, Oregon State’s offense is run-based; it focuses on gaining yards via the ground. They use play-action pass, screens and other “easier” options to move the ball through the air. Oregon’s defense is built to stop this offense, as we just saw against Utah. I’d even make the case that the Beavers’ offense is just Utah-light but with a worse quarterback.

I feel confident Oregon can slow down the Beavers. With both teams trying to run the ball, this clock will run. I will take the Under.

PICK: Under 57 points scored by both teams combined at FOX Bet

The Territorial Cup has been one-sided lately, with the Sun Devils winning five straight against their rival Wildcats. That streak ends this season as the Wildcats are in a much better place than the Sun Devils.

Arizona State fired Herm Edwards after a Week 3 loss to Eastern Michigan and has only posted two wins since. The Sun Devils beat Washington at home 45-38 and Colorado 42-34, and since then, they’ve lost three in a row without covering a game. They’ve cycled through quarterbacks and have a decent run game but are very poor defensively. As a matter of fact, they rank 69th in points per drive on offense and 128th on defense.

Their rival Wildcats have four wins but have been far more competitive this season because of their offense. The Wildcats’ offense ranks 37th in points per drive and first in the country in explosive play rate. Arizona does most of its damage through the air, and Arizona State has shown no ability to stop any opponent from doing anything.

The Wildcats have to score because their defense is awful, but I don’t think the Sun Devils can take enough advantage of that to stay within the number.

Give me the Cats.

Here’s a list of things you can do instead of wagering on this game: go shopping, mow the lawn, make a leftover turkey sandwich, throw a ball, go workout, take a nap. You get the idea.

But if you just need to feel the thrill of wagering on a Pac-12 game, take the Under.

UCLA’s season has “ended.” The Bruins played rival USC tough last weekend before eventually losing 48-45. They’re no longer in contention for the Pac-12 title game. Everything this team worked for this season after starting 7-0 with wins over Washington and Utah is for naught, as they won’t be in Vegas trying to win the conference for the first time since 1998.

It’s easy to make the case for Cal to cover this game, but guys, Cal is completely untrustworthy, and wagering a single cent on the Bears would be a waste of your money.

Cal broke a six-game conference losing streak against Stanford in the Big Game last weekend, winning 27-20. The Bears needed a defensive score to cover this game after their quarterback threw two interceptions in the end zone. They rank 97th in offensive points per drive and 82nd on defense. There’s nothing they do well. They are not going to a bowl. I do not know their motivation for this game.

So you have a game where UCLA might be flat playing a Cal team that might be flat. Or UCLA shows up and dominates. Or Cal plays better than its record, and UCLA is down bad, and Cal covers this game.

Considering all the uncertainty, the Under is your best play.

PICK: Under 60.5 points scored by both teams combined

Utah is heading to Boulder after a poor performance in Eugene against Oregon. Utah quarterback Cam Rising played his worst game in the last two seasons. Since there’s still a possibility the Utes could play in the Pac-12 title game, I think Cam and his offense have an excellent bounce-back performance this weekend against Colorado.

But more than anything, Colorado might be the worst team in the sport with a lame-duck coaching staff and a roster full of players that will soon be looking for new homes via the transfer portal. In the last five weeks, the Buffaloes have lost and failed to cover against all four ranked teams they’ve played. They lost to Oregon State by 33, Oregon by 39, USC by 38 and Washington by 47.

Utah is going to smoke Colorado.

Geoff Schwartz played eight seasons in the NFL for five different teams. He started at right tackle for the University of Oregon for three seasons and was a second-team All-Pac-12 selection his senior year. He is an NFL analyst for FOX Sports. Follow him on Twitter @GeoffSchwartz.

News Next Desk - December 2, 2022 0
Coinbase Global said on Thursday customers using Apple's iOS will not be able to send non-fungible tokens (NFTs) on the cryptocurrency exchange's wallet anymore."Apple's claim...
%d bloggers like this: