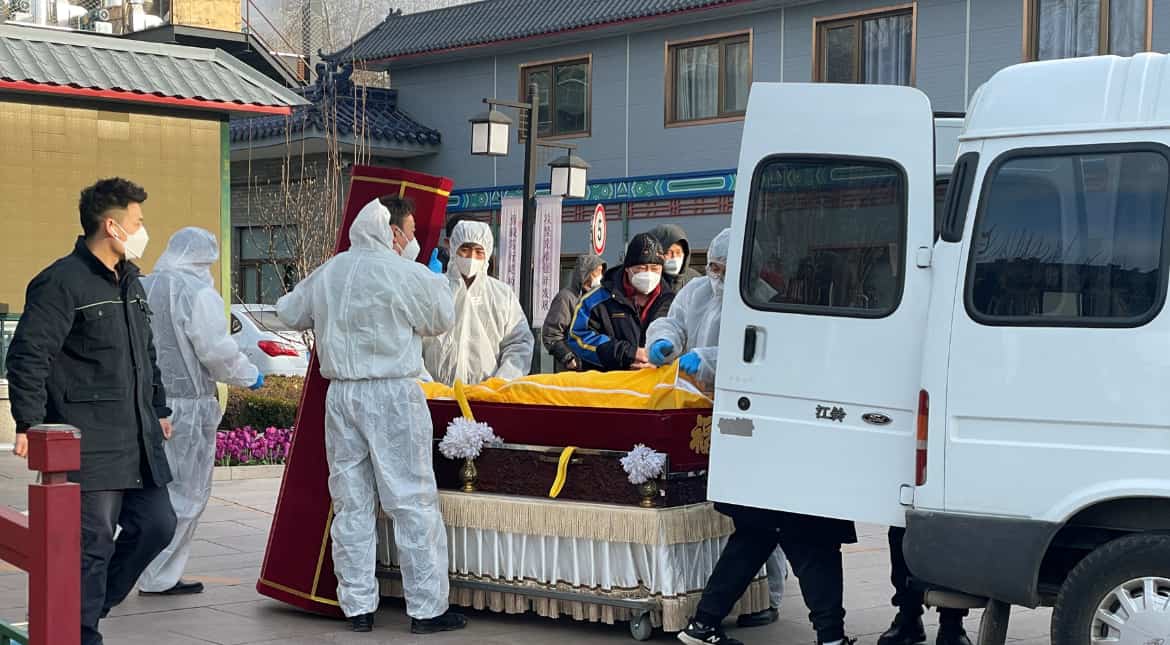 An eery quietness prevailed in the major cities of China on Sunday as people locked themselves in their homes in the wake of the burgeoning number of COVID-19 cases across the country. Currently, China is battling the first of the three predicted waves of Covid cases this winter season, as per the chief epidemiologist of the country Wu Zunyou. There is a high chance of cases multiplying in China if citizens continue returning to their homes in a mass transit movement to attend the Lunar New Year holiday to be held next month.

In the wake of surging Covid-19 cases, hearses carrying coffins were seen queued in the designated COVID-19 crematorium’s driveway in Beijing on Saturday, as workers in the funeral parlours of the city appeared busier than usual, days after the zero-Covid tolerance policy was reversed by China.

Services from delivery of parcels to catering have been hit recently after the Omicron variant, which is highly transmissible, spread across Beijing. Funeral crematoriums and homes are finding it difficult to manage the increasing demand as more drivers and workers are contracting the virus.

Officially, China has not yet reported any death due to Covid since December 7 when the government abruptly pulled back its zero-Covid tolerance policy after it faced unprecedented protests from the people against the strict protocol.

Mass testing for coronavirus has ended as part of easing curbs imposed under the zero-Covid policy, raising doubt over whether the number of cases reported officially can present the intensity of the outbreak. On December 17, around 2,097 new symptomatic infections of Covid were reported by China.

Empty subways were seen in the photos uploaded of the city of Xian on social media, as people complained of facing delays in receiving their deliveries.

Authorities in Shanghai said that schools need to schedule online classes from Monday and that schools in Hangzhou have been asked to wrap up the winter semester early.

The education bureau has directed that students attending online classes along with the pre-schoolers should not plan to return to school in Guangzhou.

Addressing a press conference on Saturday in Beijing, the Chinese Centre for Disease Control and Prevention’s chief epidemiologist Wu, as per the state media report of his speech, said that there would be a peak in the current coronavirus outbreak this winter and it will have three waves in three months.

The first wave would last from mid-December to mid-January and would mainly hit cities. The second wave would begin in late January and will continue till mid-February next year, as people would continue to travel before the week-long New Year holiday.

Starting on January 21, Lunar New Year will be celebrated in China. Normally, millions of citizens travel to their homes during holidays.

Wu said that the third wave will come when people will return from their holiday between late February to mid-March.

According to a US-based research institute, the country can witness an explosion of Covid cases this week, which can lead to the death of a million people due to Covid in China in 2023.