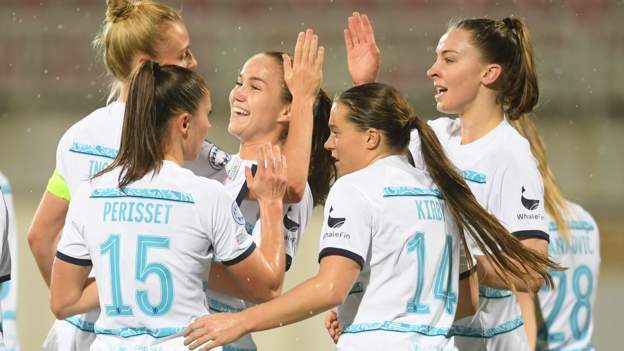 Chelsea claimed a quarter-final spot in the Women’s Champions League with ease after beating Vllaznia in Albania in their penultimate group match.

Emma Hayes’ side remain unbeaten in the competition and lead Group A with a game to go.

Fran Kirby made it 2-0 shortly afterwards, before Katerina Svitkova and Maren Mjelde, with a penalty, scored late on.

The Blues have made light work of their progression to the knockout stages despite being drawn in a tricky group alongside Spanish side Real Madrid and French two-time finalists Paris St-Germain.

They were guaranteed qualification with a draw – and could still have progressed in defeat depending on results elsewhere.

But the already eliminated Albanian side were no match for Chelsea on a wet evening at the Loro Borici Stadium, despite plenty of endeavour from the hosts.

Ingle, wearing the armband after Hayes made six changes to the starting XI, was heavily involved in the first half, dictating play and scoring a fine goal when she slotted in Guro Reiten’s deflected cut-back.

Chelsea’s lead was quickly doubled when Jelena Cankovic acted quickly as Vllaznia were slow to react to a free-kick, sliding in for Kirby, who placed it into the far corner.

The Blues’ defence was rarely tested, and chances continued to fall their way as Hayes made further changes after the break.

Striker Sam Kerr had a goal ruled out for offside in the second half before the lead was eventually extended when substitute Svitkova flicked in a third, and Mjelde scored from the penalty spot in added time.

Chelsea won 8-0 when they faced Vllaznia at Kingsmeadow but with the job done within 20 minutes, the WSL champions understandably took their foot off the gas.

They go into their final group match against PSG next Thursday knowing their spot in the last eight is already secure – in what is proving a much smoother campaign than last season, where they crashed out in the group stages.

Chelsea join WSL rivals Arsenal in the quarter-finals after they secured qualification on Thursday evening despite a narrow defeat by holders Lyon.