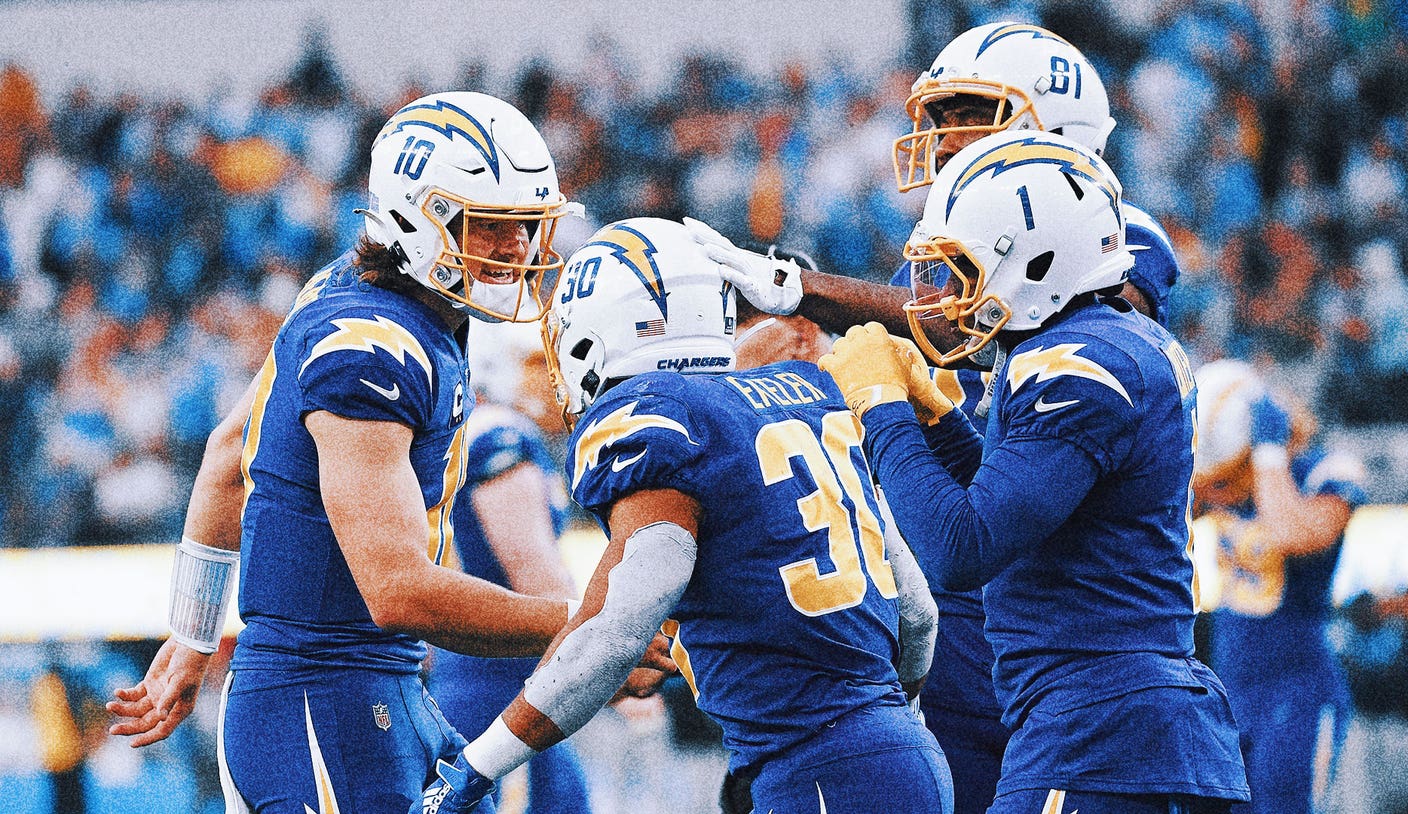 With 32 seconds left and the Los Angeles Chargers looking to get into field goal position near midfield, Justin Herbert escaped pressure to his right and spotted big-bodied receiver Mike Williams downfield.

“He kind of pointed up like he wanted a jump ball,” Herbert said. “So, I was able to lock eyes with him.”

Herbert delivered a strike, and the Clemson product went high-pointed the ball over Tennessee Titans defensive back Greg Mabin at Tennessee’s 20-yard line, putting the Chargers in field-goal position.

Cameron Dicker did the rest, drilling a 43-yard field goal with four seconds remaining for the game-winner for a gritty, 17-14 Chargers’ win over the visiting Titans at SoFi Stadium on Sunday.

The kick was Dicker’s third game-winning kick this season, and improved L.A.’s record to 8-6 on the year. The Titans dropped their fourth straight game, falling to 7-7 with the loss.

The Chargers now control their postseason destiny, currently holding the No. 6 seed in the AFC playoffs entering Week 16. It would be the first time the Bolts made the postseason since 2018.

Helping things even further for the Bolts, they face teams with a combined record of 12-28-1 in their last three games, with road games against the Indianapolis Colts (4-9-1) and the Denver Broncos (4-10). Sandwiched in between those two, AFC contests is a game against the crosstown rivals, the Los Angeles Rams on New Year’s Day in the Battle for L.A.

“It’s winning time right now,” smiling Chargers linebacker Drue Tranquill said afterwards. “We’ve got three games. We’ve got to focus on these last three games and win out. We like where we’re at right now.”

But Sunday’s win was no work of art for Herbert, who struggled on offense a week after playing one of his best games of the year last week in a win over the Miami Dolphins.

“I felt like we played the type of game they wanted us to play,” Chargers receiver Keenan Allen said. “Obviously, as an offense we didn’t play as well as we thought we would have. They kept us off the scoreboard, and they kept us off the field for the most part, too. We just had to find a way to get more points (than the Titans).”

It’s the first time Herbert finished without a touchdown pass in a game since a Week 6 win at home against the Broncos.

Tennessee’s defense made things difficult on Herbert by mixing pressures up front and playing sticky coverage in the back end. It’s the first time Herbert’s thrown two interceptions in a contest in his last 16 games. Tennessee had no turnovers in the team’s last four games entering Sunday’s contest, a franchise record.

Fortunately for Herbert, the Titans were just as inept on offense. Ryan Tannehill suffered an ankle injury on the opening drive, limiting his mobility. The Chargers took advantage by sacking Tannehill four times and holding him to just 165 passing yards. Tannehill also was picked off by safety Nasir Adderley trying to force a ball deep into coverage.

Running back Derrick Henry served as Tennessee’s offense most of the day, finishing with 104 rushing yards on 21 carries with a touchdown in the second quarter that tied the game at 7-7, along with another 59 receiving yards.

While Herbert struggled, the Oregon product also showed he could play well in games he was not playing well when it mattered most.

The Chargers took a 14-7 with 10:28 left on a bruising, 3-yard run by Austin Ekeler, his 30th career rushing touchdown. Herbert got the Bolts into scoring position by hitting Allen down the sideline for a 31-yard pass play in the red zone.

The Titans answered with an 11-play, 74-yard scoring drive of their own late in the game. Tannehill scored on a 1-yard quarterback sneak with 51 seconds to play. Titans head coach Mike Vrabel chose to send Randy Bullock out to kick the extra point instead of going for two, tying the game at 14-all.

And that set up Herbert for his heroics, as he completed two passes to Williams and one to tight end Gerald Everett, quickly getting the Chargers into field goal position. It was Herbert’s 13th game-winning drive.

The past two weeks, Herbert has shown NFL observers nationally who questioned his ability to play well in critical moments of the game that he can put his team on his back and lead them to victory when the game is on the line.

“You just have to stay together,” Herbert said. “There was no flinching, no doubt by our team, especially as an offense. It went our way after that.”

Eric D. Williams has reported on the NFL for more than a decade, covering the Los Angeles Rams for Sports Illustrated, the Los Angeles Chargers for ESPN and the Seattle Seahawks for the Tacoma News Tribune. Follow him on Twitter at @eric_d_williams.