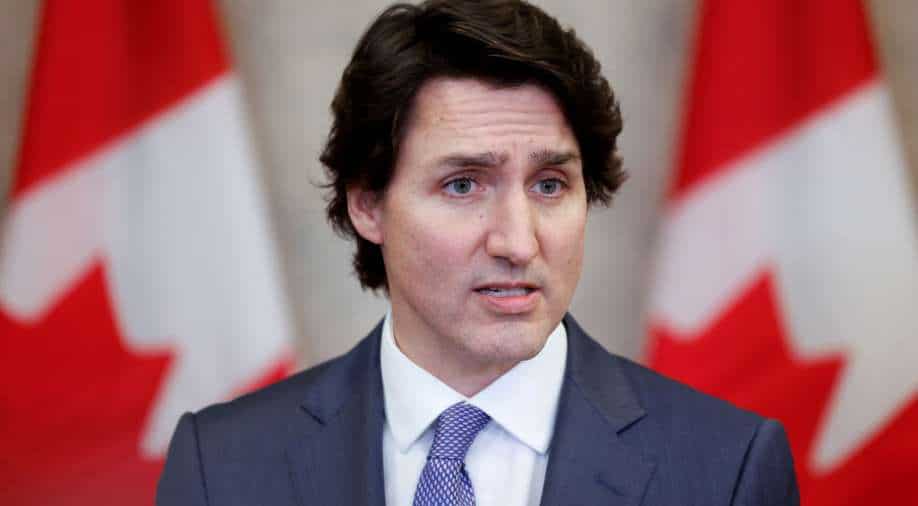 Canadian Prime Minister Justin Trudeau has found himself in soup after deleting a tweet where he falsely stated that the Iranian regime had sentenced 15,000 protesters to death.

The claim that Iran’s regime sentenced 15,000 people to death has been swirling across social media platforms for some days and Trudeau became one of the major personalities to fall for it.

The Prime Minister’s Office released a statement confirming that the tweet was deleted based on “initial reporting” that “lacked necessary context”, stopping short of apologising for the gaffe.

“It [the tweet] was based on reporting of serious concerns raised by international human rights advocates warning of possible future sentences, including the death penalty, imposed on thousands of Iranian protesters who have already been detained by the regime,” said a government spokesperson.

“These brave Iranians were fighting for their human rights – and we continue to stand united in support of them, and united against the regime’s heinous actions,” he added. 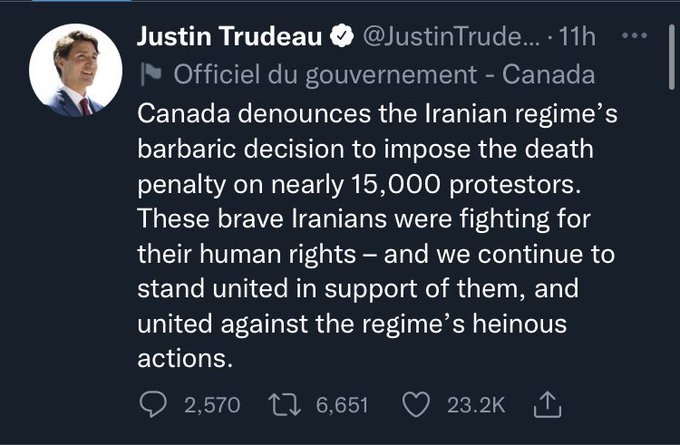 Not only Trudeau, but Hollywood celebrities such as Sophie Turner and Viola Davis have also shared and amplified the false news. However, the claim that 15,000 have been sentenced to death is objectively false as there is no evidence backing it up.

An Iranian court on Monday, however, issued the first death sentence linked to recent protests. Reportedly, the protester was convicted of “enmity against God” and “spreading corruption on Earth”.

Even then, according to state media, the ruling is preliminary and the unnamed person has the right to appeal it in higher courts.

As reported by WION, Trudeau has actively campaigned against the Iranian government ever since the death of 22-year-old Kurdish woman Mahsa Amini started a nationwide protest.

Last month, Trudeau marched alongside demonstrators in the Canadian capital of Ottawa and protested against the Iranian regime.

“We will stand with you. I’ll march with you, I will hold hands with you. We will continue to stand with this beautiful community,” Trudeau said, before ending his speech by shouting Persian slogans, his fist raised.

The Canadian government has also sanctioned senior Iranian officials multiple times over the past month as a result of the regime’s “gross and systematic human rights violations”.

Merciless weather owed to climate change thrashed the world in 2022

Sanjay Leela Bhansali reveals why he has dedicated his Ghazal album...

News Next Desk - December 7, 2022 0
Sanjay Leela Bhansali is a perfectionist and that's exactly what he has strived for in his first solo Ghazal album Sukoon, which releases on...

Samsung to bring all-screen fingerprint scanner! Will be 2.5 billion times...

News Next Desk - December 7, 2022 0
Samsung is working on a new kind of OLED display that uses the entire area as the fingerprint sensor. In-display fingerprint scanners have been around...

News Next Desk - December 7, 2022 0
At least two people were killed and several injured in a suspected suicide bomb blast at an Indonesian police station on Wednesday. Among those...

News Next Desk - December 7, 2022 0
New Delhi: The Bharat Jodo Yatra led by Congress leader Rahul Gandhi recommenced from Dara Station in Rajasthan on Wednesday morning as he and...
%d bloggers like this: