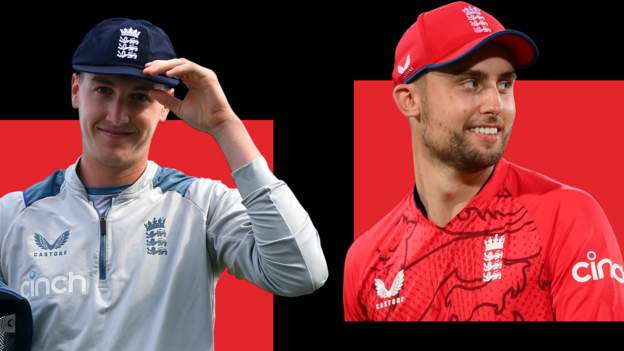 Harry Brook and Will Jacks have both been nominated for the men’s Player and Young Player of the Year awards by the Professional Cricketers’ Association (PCA).

All-rounder Nat Sciver is nominated for women’s player of the year alongside Emma Lamb and Sophia Dunkley.

Batter Brook scored 967 runs at an average of 107.44 in eight County Championship matches for Yorkshire.

The 23-year-old made his Twenty20 international debut in January.

He has been named in England’s squad for the upcoming World Cup in Australia.

Brook was included in all of England’s Test squads for the summer before making his debut against South Africa at The Oval, a match England won by nine wickets.

He won the young player of the year award in 2021, and is joined by Surrey’s Jacks and Durham’s Matthew Potts on the 2022 shortlist.

Seamer Potts, 23, made his Test debut in June and took 20 wickets in just five matches, while Jacks made his T20 debut during England’s current series against Pakistan after impressing for Surrey and Oval Invincibles in The Hundred.

Brook and Jacks are shortlisted alongside Jonny Bairstow for the Men’s Player of the Year award, who was also named England Test player of the summer after scoring 1,061 runs and six centuries in 10 matches, before being ruled out of the T20 World Cup with a leg injury.

Wayne Madsen completes the line-up of nominees after a stellar County Championship season for Derbyshire, finishing as the competition’s leading run-scorer across both divisions. His 1273 runs came at an impressive average of 60.61, with three centuries and 10 half-centuries.

The award was won by former England Test captain Joe Root in 2021.

During England women’s season, Lamb and Dunkley both made their maiden international centuries against South Africa, while Sciver scored unbeaten hundreds in both the World Cup final against Australia and England’s only Test of the summer against South Africa.

Lauren Winfield-Hill completes the shortlist after finishing the leading run-scorer in the Rachael Heyhoe Flint Trophy and winning the title with Northern Diamonds.

Alice Capsey, 18, has again been shortlisted for the Women’s Young Player of the Year, having won the award in 2021, alongside all-rounders Freya Kemp and Grace Scrivens.

The awards ceremony takes place on Thursday 6 October and recognise performances across both domestic and international cricket.

Switzerland to update rape definition; lawmakers clash over ‘no means no’ and ‘only yes means yes’ approaches

Switzerland to update rape definition; lawmakers clash over ‘no means no’ and ‘only yes means yes’ approaches

News Next Desk - December 6, 2022 0
As the MLB world descended on San Diego, Calif. for the annual winter meetings, the most coveted free agent in the...

News Next Desk - December 6, 2022 0
New Delhi: Bigg Boss OTT winner Divya Agarwal celebrated her 30th birthday with her friends and family on Monday and made a BIG announcement too....

News Next Desk - December 6, 2022 0
John Fanta College Basketball Broadcaster and Reporter Week four of the college basketball season showcased that parity is alive and...
%d bloggers like this: