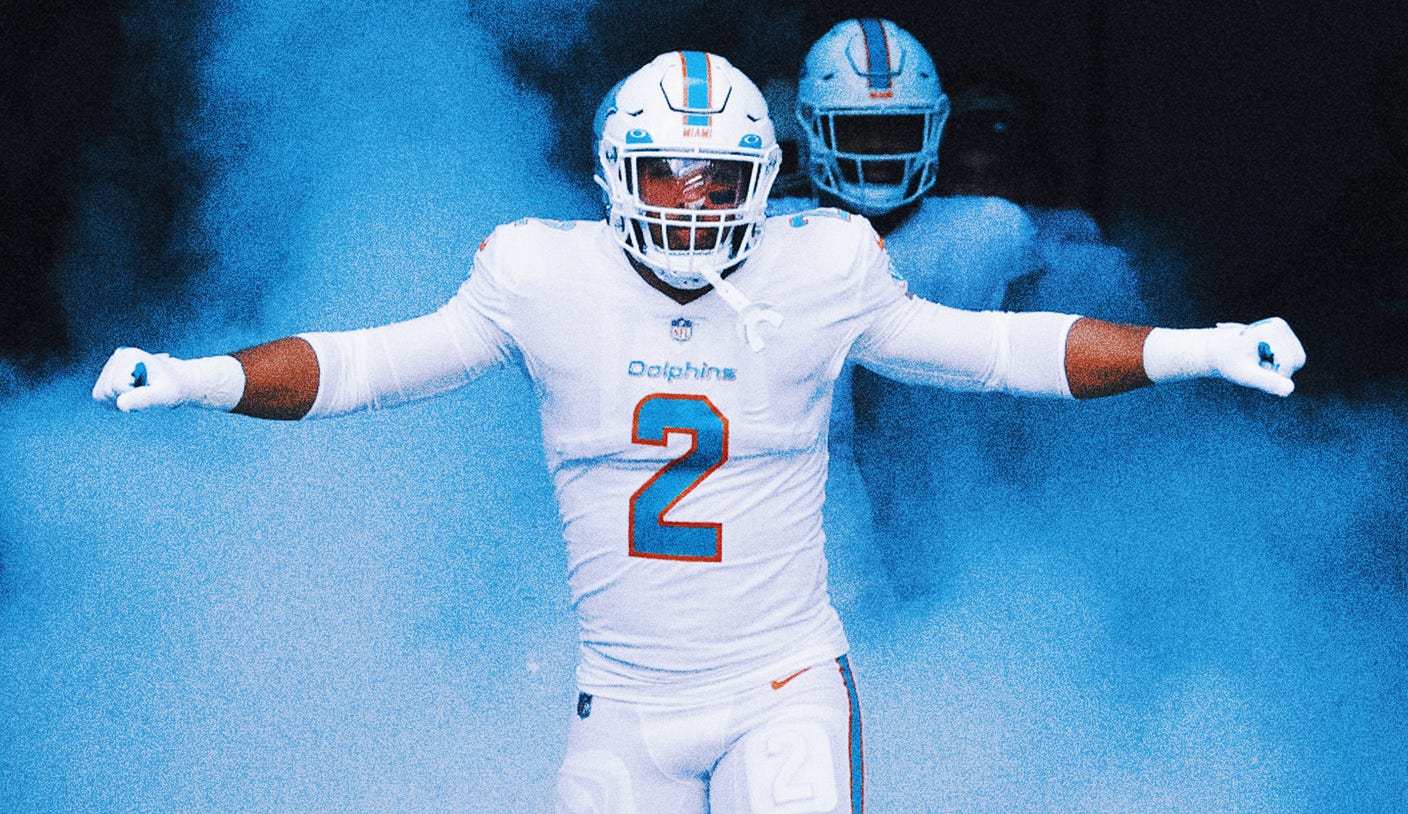 Bradley Chubb has been hearing Von Miller‘s voice in his head over the past few weeks, particularly a piece of advice Miller gave Chubb in his rookie season. It has proven invaluable ever since the Denver Broncos traded the edge rusher to the Miami Dolphins a month ago — a move that ratcheted up the team’s Super Bowl expectations.

“I was feeling pressure to be a first-round pick,” Chubb told FOX Sports. “[Miller] sat me down and was telling me, ‘Man, having that pressure on you — it’s a privilege.’ You prove to all these people what you can do. Everybody expects it. You can’t just run away from it. You’ve just got to embrace it.”

That advice is how Chubb has faced the growing expectations over the Dolphins’ Super Bowl chances. He has embraced the challenge, without letting expectations balloon out of control.

“If we all keep that winning mindset and that winning culture, I feel like we’re gonna do damage for sure,” he said.

Does Chubb trade put Dolphins on level with Chiefs and Bills?

After the Dolphins acquired OLB Bradley Chubb from Denver right before the Nov. 1 trade deadline, Joy Taylor offered her thoughts on if the move put Miami at the level of the best squads in the AFC.

There are no questions about the Dolphins offense, which is on pace to finish in the top five in just about every statistic.

But the defense? That’s where the questions lie. That’s where the Dolphins will need to improve. They are right in the middle of the league in points per game and yards per game allowed. They are 17th in DVOA, an advanced statistic measuring overall efficiency. That probably won’t be enough to get the team where it wants to go.

Chubb — even in a state of transition — needs to be a deciding factor in making this defense better if the Dolphins (8-3, second in AFC) are going to compete for a Super Bowl.

“Going on five years and [I’ve] never been in the conversation this late in the season,” Chubb said this week.

With the Broncos, he never made the playoffs.

Denver and Miami are so different for so many different reasons. But the two football teams are totally different case studies on going all-in for a season. The Broncos looked poised to make a Super Bowl run before Week 1, with quarterback Russell Wilson seeming like the missing piece on a hugely talented squad. But their season has been a disaster, in part because their offensive pieces — including Wilson — haven’t fit. The Dolphins, meanwhile, went all-in and every acquisition seems to be working out, from Tyreek Hill to Terron Armstead to Jeff Wilson to Chubb.

And so it’s fair to wonder whether Chubb felt like he stepped off the Titanic — just in time.

“Short term, what I can see already is the life that is injected into me,” Chubb told me. “And it’s just a fresh start with also having a team that’s having that winning mindset and that winning culture. So it’s been dope, man, just to see where I was a couple of weeks ago mindset-wise and see where I am now. It’s crazy how far you could go.

“So it’s not like I jumped off the Titanic. God put me in this position, man. So now I gotta make the most out of it.”

Certainly, his teammates and coaches are impressed with the way he has grasped the playbook in a short time. In his debut in Week 9, Chubb managed to play 54 snaps (73%). He logged a tackle and two pressures. Per Pro Football Focus, it was his second-lowest defensive grade of the season (including the other two games he has since played for the Dolphins).

It wasn’t the easiest start for Chubb. He’ll admit that. You have to understand the context of the whirlwind that Chubb lived through.

Let’s go back to the day of the trade deadline. He had just flown back from London — where the Broncos had played in Week 8 — when he started seeing reports on Twitter that Denver might trade him. Sure enough, he received a phone call from general manager George Paton.

“As soon as he told me I was being traded to Miami, I kind of like zoned out. I’m not going to lie to you,” Chubb told reporters earlier this month.

Five minutes later, Chubb got on the phone with Dolphins coach Mike McDaniel and found out that he would be on a plane that night to Miami.

“It’s never real until it’s real, you know? So once I got the call,” he told me, “all the things started rushing in my head, like: ‘What’s the scheme gonna be? Who are my teammates gonna be? Where am I gonna stay?’ Just all that kinda stuff was in my head a lot. I’m just thinking like, ‘Oh, man, I gotta pick up and move.'”

Chubb is 26 years old. For the first time since he left college at NC State, he had to move. He had to change employers. And he had the equivalent of five hours notice.

So trying to shake the negativity — and the jet lag from London — he boarded that private jet a few hours later, and he went to sleep. He was so tired he didn’t even wake up when the plane landed in Dallas to pick up Wilson, the other player Miami acquired at the trade deadline.

After he landed in Miami, Chubb had no idea where he was going to live in the coming days. He made it to the Dolphins’ facility for the team’s first practice on Wednesday in preparation for the Chicago Bears that Sunday. Even at practice, he felt out of place. It started during warmups.

“I’m looking around like, ‘Am I doing this right? Bring me along, too,'” Chubb said. “I was just like, ‘Oh man, this is gonna be so different. It’s gonna be crazy. Why is this happening to me? Why do I have to be the one to pick up and move?'”

Chubb was simply trying survive that first week. In his second week in Miami, everything started to change. He started figuring out tricks to learning the defense. He was writing down plays six times to make sure he memorized them. He quizzed himself and he had his girlfriend quiz him. He worked relentlessly to prepare. And his new teammates picked him up.

“It was kind of a relief, like a sense of happiness came over me just to be in a whole new system with new guys and being able to let my light shine with new people and being the same me,” Chubb said.

In the past two games, Chubb has logged 1.5 sacks, a forced fumble and eight pressures. The coaching staff has tinkered with the ways the defense can use him. And the coaches will keep experimenting, which might not produce the most amazing PFF grades in the short term. Though in Week 10 against the Cleveland Browns, Chubb did manage to post his third-best PFF grade (76.2) of the season.

There’s room to grow. Chubb will come to understand this defense. He’ll come to serve as a leader in a locker that already had plenty of vocal veterans. And he’ll work in concert with a set of excellent edge defenders in Jaelan Phillips, Melvin Ingram and Andrew Van Ginkel.

That should help set up the Dolphins defense for much success in the future — both this season and in future seasons. Chubb, who made the Pro Bowl in 2020, has the opportunity to be the face of this defense — and a perennial Pro Bowler. He can elevate his star status beyond what it was in Denver. And that’s what made his jersey number selection — No. 2 — interesting.

Jalen Hurts, Patrick Mahomes have the most to gain from SBLVII win | FIRST THINGS FIRST

News Next Desk - February 4, 2023 0
Nvidia says there’s a fix for a recently discovered issue where Discord being open in the background limited the performance of some graphics cards....

News Next Desk - February 4, 2023 0
Alabama is hiring Notre Dame assistant coach Tommy Rees to be its offensive coordinator, a person with direct knowledge of the...

News Next Desk - February 4, 2023 0
It would have been a great college prank, but the Iowa athletic department crushed it.The Illinois student spirit group "Orange Krush"...

Jalen Hurts, Patrick Mahomes have the most to gain from SBLVII...