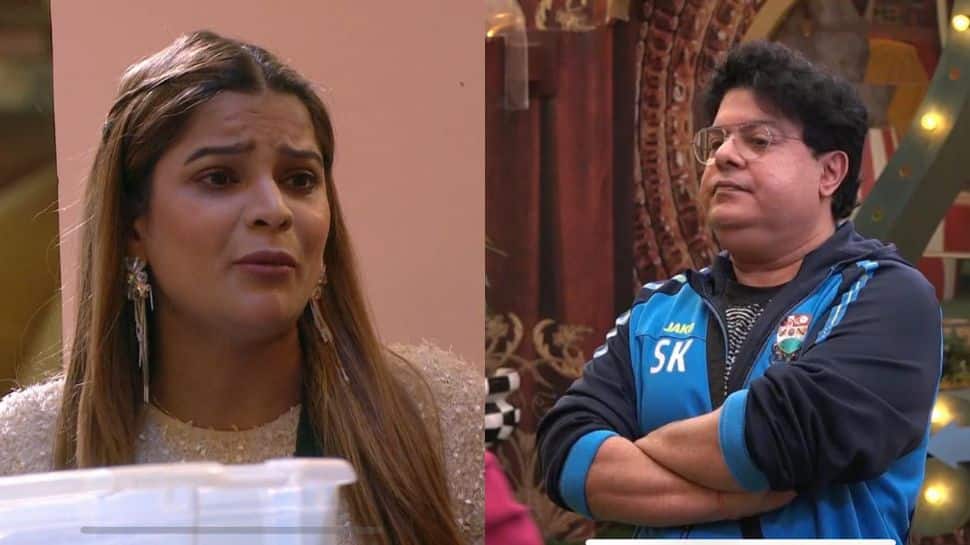 New Delhi: It’s another day at the Bigg Boss house and we are back with the updates. The day begins with Bigg Boss anthem. Sajid says Tina and Nimrit should ignore Archana. He says she has been sent to trigger all of us. Priyanka and Ankit get into an argument over who does more for the other. Soundarya asks Archana to get almond milk but she denies. Priyanka and Ankit’s argument intensifies and goes beyond jokes. He says very soon I’m going out of the house.

Bigg Boss then announces ration task. The contestants have to climb up the truck and get ration for their rooms while captain Shiv will drive the truck. During the task, Archana and Sajid get into an argument over the driver of the task. Archana calls Sajid rich and says his father will drive the truck. Sajid gets infuriated and says I’m provoked now. They get into a big fight over it. They keep on arguing and all the housemates get involved. Archana says don’t go on my mother and starts shouting. Priyanka and Soundarya also blame Archana for talking like this.

Priyanka says to Archana to not come to anyone’s mom and dad. Sajid says Archana is destroying the energy of this place and Bigg Boss keeps bringing her back. Ankit says kicking was wrong. Priyanka and Soundarya get furious at Archana and ask her to leave their room. Archana says everyone is fake and I am very hurt with Soundarya. Soundarya says she is lashing out at me for ginger, what should I say now? Soundarya says I stood up for Archana in front of Sajid and still she is behaving like this.

Sajid gets emotional in front of MC Stan and Shiv. He says I lost my father to alcohol and I could not do anything. He says Salman Khan’s father Salim came to help me at that time. He says until Bigg Boss calls me to confession room, I will not eat food. Meanwhile, Soundarya and Archana try to resolve their issues.

Sajid asks Bigg Boss to call him to confession room. Soundarya tries to clarify things with Sajid. Bigg Boss calls Shiv and Nimrit into the confession room and ask their opinion on Sajid and Archana’s fight. Bigg Boss says Sajid’s condition of not eating is not good. Nimrit and Shiv ask Sajid to eat food and not protest as it’s not that grave a matter.

Housemates celebrate Sajid’s birthday. He thanks them.

Priyanka breaks down in front of Ankit and says you have made fun of this on national television. He tries to resolve the issues but again ends up hurting Priyanka.

Hady Amr says US is committed to reopening consulate in Jerusalem

AWS CEO: Embrace cloud and save your dollars…and possibly the world too

Hady Amr says US is committed to reopening consulate in Jerusalem

News Next Desk - December 1, 2022 0
Washington is committed to reopening its Jerusalem consulate for Palestinians, the top US official on Palestinian affairs Hady Amr said on Wednesday amidst a...

AWS CEO: Embrace cloud and save your dollars…and possibly the world...

News Next Desk - December 1, 2022 0
The CEO of Amazon Web Services (AWS) has looked to appeal to businesses around the world in a bid to strengthen the status of...

News Next Desk - December 1, 2022 0
Rep. Hakeem Jeffries has been elected to succeed Nancy Pelosi as leader of the Democrats in the House next year. Jeffries will become the...
%d bloggers like this: