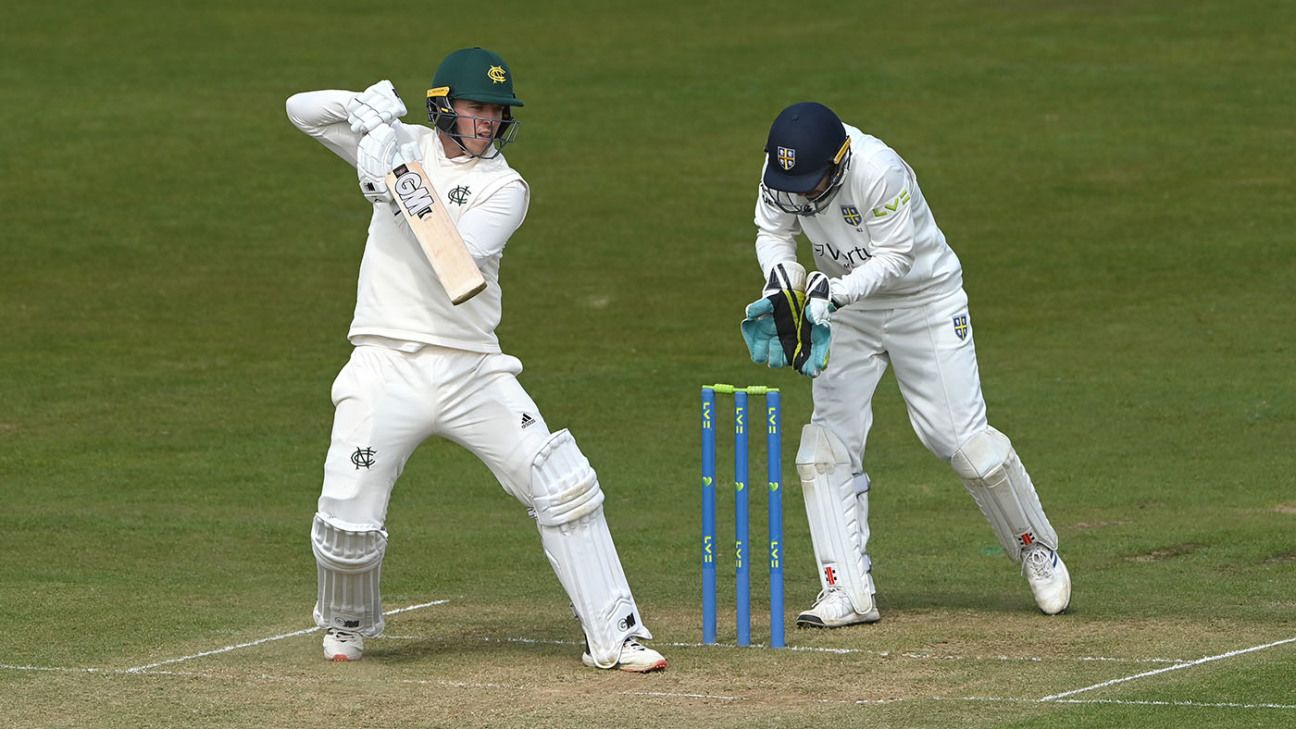 Lyndon James is the Nottinghamshire batter who barely gains a mention. No longer. His maiden first-class century might have been compiled on a lifeless surface at the Riverside, but it was a worthy landmark nevertheless and the likelihood is that he will make many more in more exacting circumstances. Stylish and understated, he ground Durham into the dirt and once again underlined that he is an allrounder of considerable promise.
James was not Notts’ only century-maker. Ben Slater, 164 not out at the close, returned his first Championship century for a year. He already has his highest Notts score and his career-best is seven runs away. Both progressed in untroubled fashion throughout a sunny second day that might have been termed soporific had it not been for the sharpening effects of a chill nor’easterly which kept spectators upright in their seats and then persuaded them to cut out early in the final session. Slater was heavily off-side dominant, carving and driving. James’ serenity means that many of his well-timed boundaries, the best off the back foot, just crept over the rope as if not to waste excess energy.

The more celebrated trio of Haseeb Hameed, Ben Duckett and Joe Clarke all missed out. Matthew Potts was responsible for that, his energetic, attacking pre-lunch spell almost signifying that Durham needed to strike early. Hameed was lbw on the back foot, a vision of watchfulness but missing it nevertheless; Duckett’s half-century was inventive and a little impatient and when he dragged onto his stumps it was a disappointing end; Clarke, with a couple of overs to survive before lunch, pushed at a wide one.

But Durham’s pre-lunch bowling resolve died as overs built up and the inevitability of batting dominance took hold. Slater and James have so far added 216 in 50 overs for the fourth wicket. Slater’s luckiest moment came on 99 when he cut the offspinner George Drissell into the pads of the wicketkeeper, Ned Eckersley, and ran for the ricochet. James also flirted with a play-and-miss at Potts on the same score. The new ball did nothing.

Drissell, a concussion substitute for Liam Trevaskis, could not exert the same pressure that his fellow spinner Liam Patterson-White applied on the first day, but he was unfortunate not to have Duckett caught at mid-off on 19 when Scott Borthwick, running backwards, failed to lock on to a steepler. Since his first senior wickets at the Cheltenham Festival four years ago, where academia encourages optimism, rewards have not come easily.

Oh, Chester-le-Street, what has become of you? You used to be such a lark, always fun to be with, flouting authority as you swung and seamed to your heart’s content. The rebel of the north we used to call you, with a nod of recognition to the Angel of the North which dominates the skyline a few miles up the A1 in Gateshead. Now look at you: impeccably well behaved, smartly groomed, the sort of square you would introduce to the ECB without a second’s thought. No wild days now, just predictability and convention. If this is the future, not everybody will be sticking around for the ride.

Some people apparently think that the Angel of the North was built in celebration of Alan Shearer’s goalscoring exploits for Newcastle United. There’s nowt as queer as folk. In actual fact, the architect, Anthony Gormley, came up with three explanations which was probably two too many, but was a good attempt to persuade the nay-sayers to recognise its brilliance. It variously represented coal miners of the north-east who worked in the dark for two hundred years, it was a bold grasp of the future, expressing our transition from the industrial to the information age, and lastly it was a focus for our hopes and fears.

As far as the Riverside, the fallen rebel of the north, is concerned, “the focus for our hopes and fears” is the most apt because the four-day game in England is at an uncertain stage. Overly seek to satisfy ECB demands for hard and true surfaces, so theoretically producing batters with unbreakable concentration, 90mph quicks and mystery spinners, and what you often get, in April anyway (midsummer is a totally different story), are slow surfaces that become deader as the match wears on, an unbalanced contest proceeding along predictable lines and bored spectators. And on chilly days like this, it needs to be said, many people are bored. Cold weather, in particular, needs cut and thrust. For those who watch, the fun has gone.

Luke Fletcher, Notts’ indefatigable seamer, put it more jovially on BBC radio: “I used to like Chester-le-Street. I’m not sure now.”

Potts, as he must be, was defiant. He looks the likeliest to make things happen on such surfaces whereas Chris Rushworth, so often Durham’s saviour, could be feeling his age. “It was a long day in the dirt and toil for the boys,” Potts said. “If this is a sign of the way things are going to go, I think we might see a few more draws. We’ve just got to get better and adapt as a bowling unit, which is something we’re having a lot of discussions on to get wickets on these types of pitches.”

Notts, with a lead of 141, can anticipate taking that to 300 soon after lunch on the third day, but even with their excellent pace attack, it would be unwise to delay their declaration any longer. This is not a one-off. Leicestershire batted out the final day at 183 for 2 last week, against what remains a highly serviceable Durham seam attack, just two pitches down on a square that was relaid 18 months ago. The moisture content on this surface apparently started out even lower than last week. But Notts shouldn’t be in Division Two anyway and are rightly favourites to win it so if any side can force a victory they can.