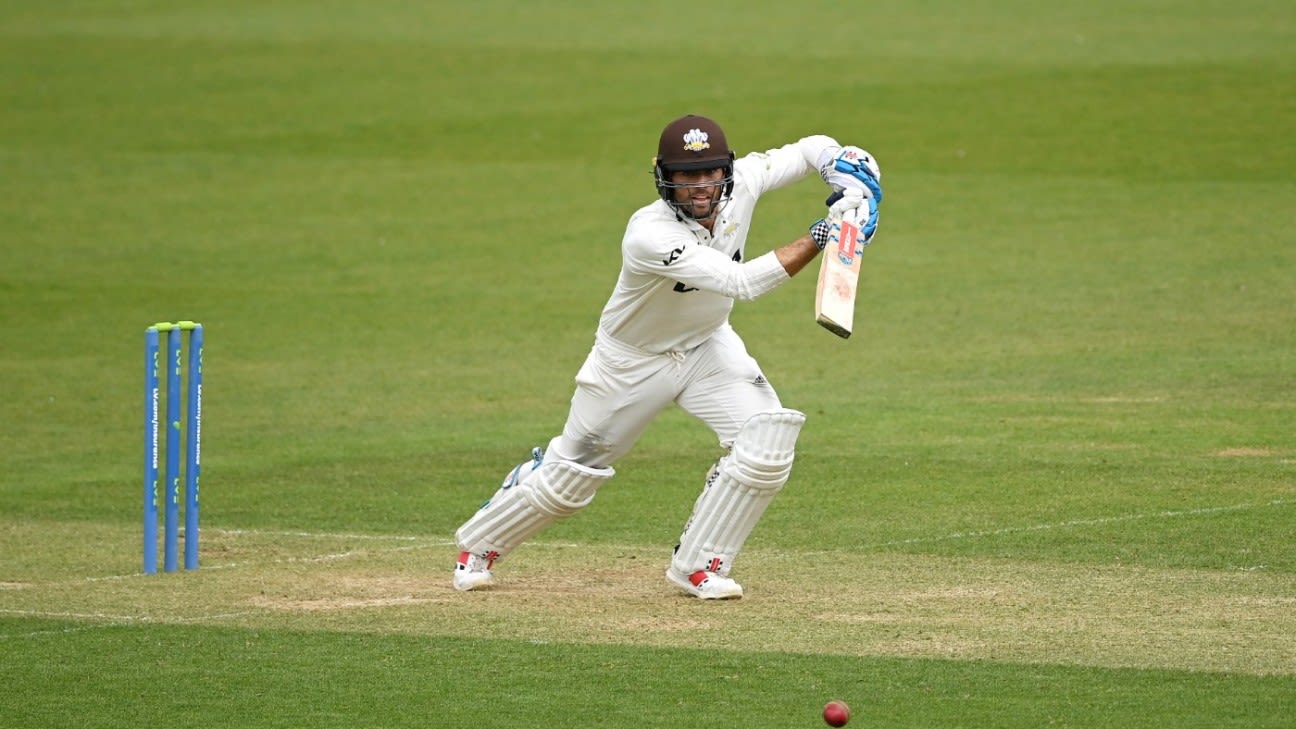 Ben Foakes tucked Josh Davey off his pads, jogging through for a single to take him from 39 to 40. Four-and-a-half thousand miles away, Jos Buttler leaped and punched the air to celebrate his third hundred of the season for Rajasthan Royals, his fourth in his last eight IPL innings.

An hour later, Foakes edged Peter Siddle to second slip for 63, taking his tally for the season to 240 runs for twice out, under dark clouds in the south London chill; Buttler lurked in the outfield in the stifling heat of south Mumbai as Delhi Capitals’ run chase faded away.

It is Foakes’ great misfortune that he was born so soon after one of the country’s most talented ball-strikers, without whom he might well have enjoyed several years as England’s first-choice Test wicketkeeper. As Theodore Roosevelt put it, comparison is the thief of joy.

Foakes’ innings was typically classy. He clipped seven fours through wide mid-on and caressed three more through the covers, knocking singles into gaps and defending solidly in between. Not for the first time this season, he benefited from some luck: he was dropped on 2 by Tom Banton at short midwicket – who atoned with an outrageous diving catch at deep backward square leg off Ollie Pope – and survived a chance for a run-out when Tom Lammonby threw wide of the stumps, but in batting for more than three hours, he ensured Surrey recovered from an early stutter.

But throughout his innings, the English cricketing world had its eye on another wicketkeeper-batter. How could it not? Buttler’s form has been irresistible. Every innings he plays is appointment-to-view television. Even the Championship’s most ardent defenders would concede that there is an untamed beauty in the way he hits the ball, and a hint of genius in his calculated assaults.

Of course, Buttler’s unadulterated brilliance in coloured kit against a white ball has often detracted from his standing as a Test batter. His record compares favourably with every batter capped by England since his debut, but the contrast with his dominance elsewhere is stark. Unlike Foakes, who looks most comfortable in a long-sleeved white shirt, Buttler’s colour is pink – or red, or light blue.

There has been little to separate them as Test batters to date: Buttler’s average is a shade above 30, Foakes’ is a shade below. Foakes is widely regarded as the better keeper but showed in the Caribbean that he is hardly infallible, while Buttler’s thousand-yard stare after he dropped Marnus Labuschagne at Adelaide in December has clouded judgement over his ability with the gloves.

Which of them – if either – should keep wicket in England’s first Test of the summer against New Zealand? And how can their performances today possibly be compared? If Rob Key re-introduces the position of national selector as widely expected, the appointee will again be reminded that selection is an art, rather than an exact science.

The simplest answer is to concede that the game’s various formats are diverging to such an extent that Buttler should be set free, never to face a dark-red Dukes ball again and given room to thrive against the white Kookaburra. Foakes would take over as Test wicketkeeper, with his best years ahead of him and the long-term backing that he needs to thrive.

And yet… with Buttler in this sort of form, with such obvious talent, it is tempting to strip the game back to its most basic elements: if he can hit the world’s best bowlers for 100-metre sixes in the IPL, marrying destruction with dependability, why shouldn’t he thrive against them in another format? It is the logic that underpinned his recall four years ago, when Ed Smith took a calculated gamble and gave him a free role at No. 7.

Either way, Surrey were grateful for Foakes’ runs. They trailed Somerset by 133 runs at the close, and if Banton had held onto his early chance, they would be at risk of following on. Foakes added 80 with Pope for the fourth wicket, then 45 with Sam Curran for the fifth to steer them through a tricky afternoon in helpful bowling conditions.

Siddle, who yesterday became the first Australian fast bowler since Michael Kasprowicz to reach 200 first-class appearances, had struck early, having Ryan Patel well caught by Jack Leach at point. After lunch, Craig Overton removed Rory Burns and Jack Brooks had Hashim Amla caught in the slips with his eighth ball of the season, leaving Surrey wobbling at 48 for 3 before their recovery.

Tom Abell, unbeaten on 121 overnight, reached exactly 150, the highest score of his first-class career, before he ran out of partners to give Somerset 337 – more than they had made across both innings in their one-wicket defeat against Essex last week. After a run of six consecutive defeats, they look well-placed not only to avoid a seventh, but to push for their first Championship win in nearly a year.