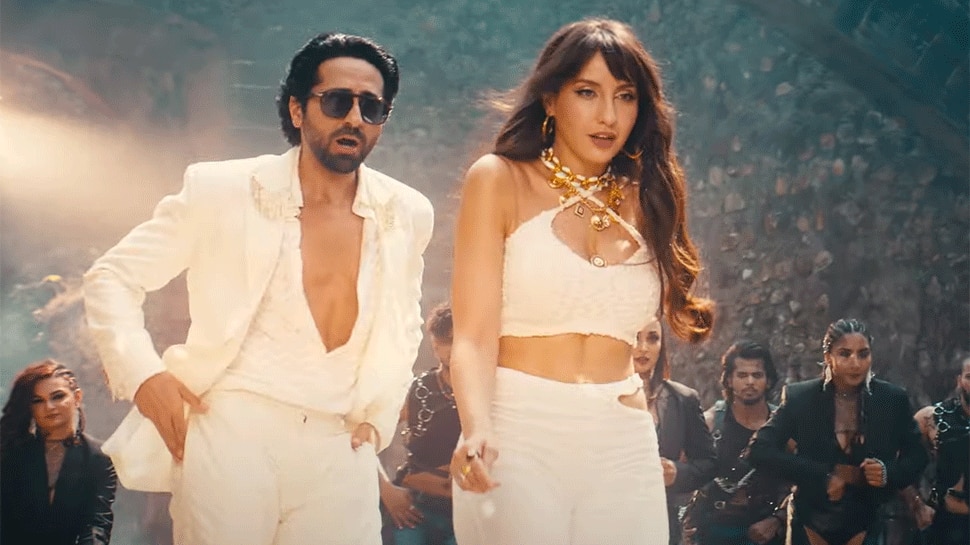 NEW DELHI: Ayushmann Khurrana is one of the most versatile actors in the film industry. The actor has often proved his mettle for acting with several power-packed performances in his films. Ayushmann is currently promoting his upcoming film ‘An Action Hero’, which is slated to arrive in theatres on December 2. On Thursday, the makers of the film released a peppy number ‘Jedha Nasha’ featuring Ayushmann and Moroccan beauty Nora Fatehi.

The song has received a positive response from the audience and has so far been viewed over 11 million times.

Ayushmann and Nora Fatehi amazed their fans with their sizzling chemistry and dance moves in the song. While Nora is known for her scintillating moves and has given so many hit songs in the last few years, this is the first time Ayushmann has showcased his moves and his fans are impressed.

Watch the song below:

The song ‘Jehda Nasha’ was originally sung by singers Amar Jalal and Faridkot, and has 26 million views on YouTube handle. It is a big hit among mesophiles. The latest peppy number from the Ayushmann Khurrana-starrer is the recreated version of the original.

‘An Action Hero’ is directed by Anirudh Iyer, who previously worked as an assistant director on Aanand L Rai’s ‘Tanu Weds Manu Returns’ and ‘Zero’. Neeraj Yadav has penned the screenplay. The trailer of the movie was released on November 11. It stars Jaideep Ahlawat alongside Ayushmann. The film is based on an actor’s journey in front and behind the lens who promises action and an offbeat sense of humour.

Ayushmann was last seen in Doctor G with Rakul Preet Singh and Shefali Shah. The film was released on October 14 but did not do too well at the box office.

China unwilling to allow ‘effective’ foreign COVID vaccine despite the protests: US

News Next Desk - December 4, 2022 0
United States officials on Saturday revealed that even with the challenges china is facing, the nation's leader Xi Jinping is unwilling to accept Western...

News Next Desk - December 4, 2022 0
The Congress party on Saturday questioned the government over the media reports claiming China has built 200 shelters in the Depsang area in Ladakh...

News Next Desk - December 4, 2022 0
New Delhi: Police have arrested and charged a man with murder in connection with the death of Migos rapper Takeoff, who was shot dead last...

I have moved on: Malaika Arora opens up about her life...

News Next Desk - December 4, 2022 0
New Delhi: Bollywood diva Malaika Arora is coming up with her show `Moving in with Malaika`. On Friday, she took to Instagram and dropped a...

Only Sanatana Dharma Followers Should Have Stayed Back After Partition, Says...

News Next Desk - December 4, 2022 0
New Delhi: Union minister Giriraj Singh on Saturday said that at the time of "Partition based on religion", it was not ensured that "only...
%d bloggers like this: