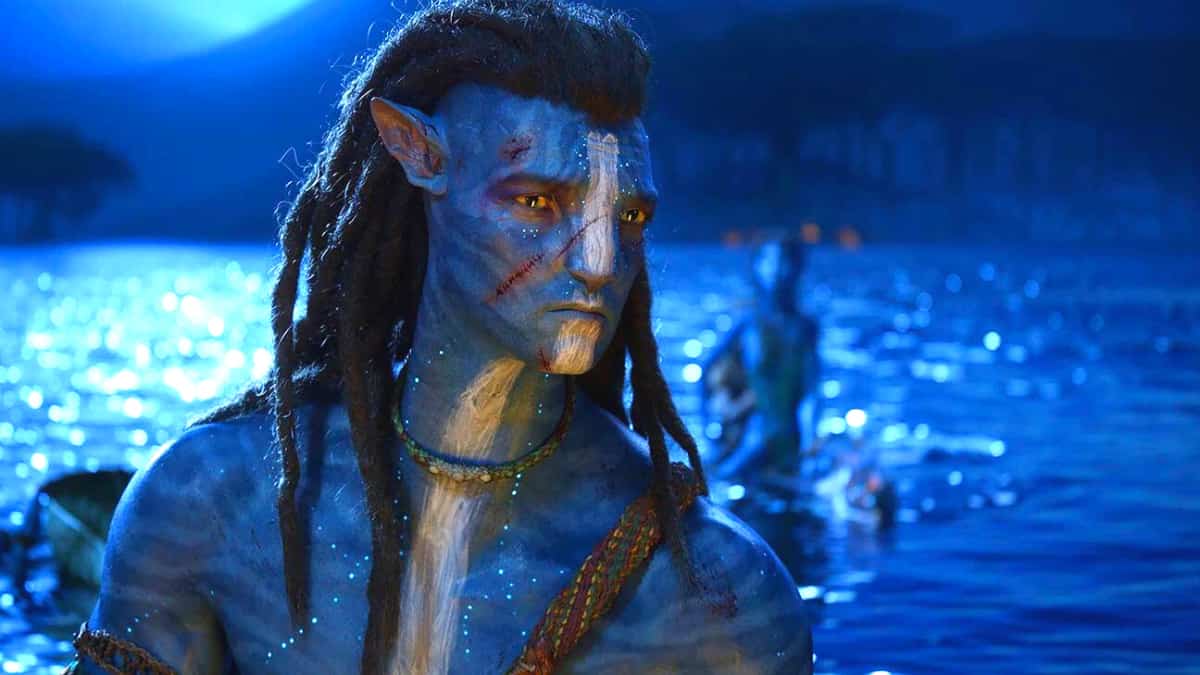 Avatar The Way of Water movie review: A man of gargantuan ambitions, James Cameron never settles. His visions are often not possible to attain, so he gets new filmmaking technologies developed to realise them. This guy would rather wait for decades for the technology to catch up to his vision than create something half-baked. And he can do that because he has clout like no other filmmaker working today, born out of a decades-long, immensely successful career.

13 years after demolishing the global box office with ‘Avatar’, Cameron is back with the first of many sequels. Titled ‘Avatar: The Way of Water’, the second film features fresh adventures for Jake Sully (Sam Worthington) a paraplegic marine who sided with the Na’vi in the conflict against humans in the original and became one of the tall, lithe, and blue-hued natives himself. He and his native wife Neytiri (Zoe Saldana) have children now: three of theirs and two adopted. The stakes are higher than ever before.

As the old foes at the RDA return to complete what they started in the first film with a renewed sense of vengeance, Jake and Neytiri flee their homeland with their children to protect the Omaticaya clan.

They find themselves among the Metkayina, a water-loving Na’vi clan with a paler blue skin colour to mirror the sea. They live around a reef and have amphibious qualities, allowing them to inhabit both worlds. Initially unwilling and hostile, the leaders of the clan, Tonowari (Cliff Curtis) and Ronal (Kate Winslet) eventually take the fugitives in and teach them their aquatic ways. Unbeknown to them, the Sullys have brought the war right to their shores.

The visuals are breathtaking

Let’s get this out of the way: ‘The Way of Water’ is an astoundingly good-looking movie. That shouldn’t be a surprise considering how pretty the original was. It is gorgeous in a cinematic, dynamic way. The new, amazingly detailed locales will take your breath away. It sounds weird when I say this, but despite being so beautiful, the film manages to be subtle. The visual elements seamlessly blend into one other, and the film encourages one to forget everything you are looking at was created in computers. In a few shots, particularly in the water, I am certain Cameron was showing off. And indeed my jaw was hanging slack, wondering how in the world he did it.

3D here is very simple and yet very, very effective. I’m not a fan, per se, of the technology as it mostly comes off more as a distracting gimmick than anything that genuinely enhances the viewing experience. Except, that is, when Cameron does it. I am a grown man, and no longer get impressed by raindrops that seem to fall in your eyes or birds that appear to flutter right before your face. I, in fact, avoid 3D in movies like the plague. But thanks to sparing but clever 3D elements in ‘The Way of Water’, I found myself trying to protect my face from being scratched by a stray branch. And judging the the “oohs!” in the theatre, I wasn’t the only one.

There is no filmmaker that can come even close to Cameron when it comes to making technologically groundbreaking cinema.

Is the story worth getting invested in?

If visual beauty is all you believe makes movies worth watching, then ‘The Way of Water’ will automatically become one of your favourite films this decade, maybe even the century. But I am not one of those, and I found a lot to criticise in ‘The Way of Water’.

Basically, I have the same complaints with ‘The Way of Water’ that I had with the original ‘Avatar’. No one in their right mind would take exception to his vision, but beneath all that eye-candy, the film has a painfully conventional story involving conventional characters told in a traditional Cameron way. The director has never been an impressive deviser of complex, gripping plots and characters beyond surface level. He does have the uncanny ability to build exciting narratives around action set pieces, and ‘The Way of Water’ is no exception. ‘The Way of Water’ is, in effect, a typical Cameron movie with all its glories and downfalls.

While still surface-level and written to service the plot, there is more depth to Sully, Neytiri and the rest of the family. Sigourney Weaver is back but since Grace Augustine died, she plays the role of her teenage daughter, now adopted by Jake and Neytiri. It is constantly immersion-breaking to hear a 73-year-old woman giving voice to a teenager. The film tries to create drama out of the kids this time, particularly how they interact with the children of Tonowari and Ronal. The hostility, bullying, and acceptance. There is also trouble between Jake the father and his younger son Lo’ak (Brian Dalton). But sadly, it all comes across as something we have seen before, and done much better.

Even the themes are pretty much the same, as sweeping and simplistic as before. Just like ‘Avatar’, none too delicately, hammered home the point that we should protect our forests, ‘The Way of Water’ brings our attention to the oceans. New creatures in the film include over-friendly whale-like mammals called tulkun, and naturally there are whalers extracting from their blubber the Pandora equivalent of whale oil, Amrita. Similar to the nectar in Hindu mythology that is supposed to make its consumer immortal, Amrita stops aging.

Yes, the natural world and the equilibrium in fragile ecosystems is worth preserving. And yes, many indigenous populations have a strong connection to the flora and fauna in the regions they inhabit. Oh, and technology can often be dangerous. But natives have also made many animals of yore extinct by systematically hunting them until not one member of the species is left. This is why we do not have mammoths roaming around. And technology has lifted millions out of poverty, made our lives easier, and can ultimately lead us away from fossil fuels. So, Mr Cameron, it’s not all straightforward.

Add to all that, the film’s runtime is punishing. Despite a blistering, action-packed third-act, ‘The Way of Water’ takes forever to end.