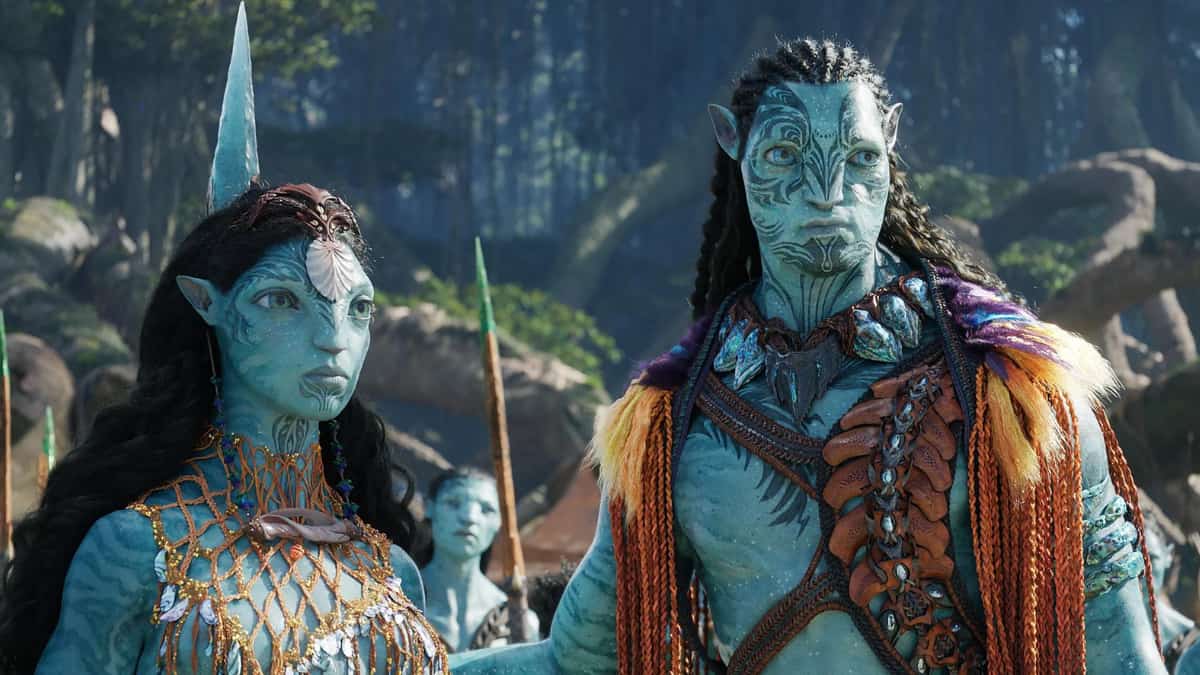 ‘Avatar: The Way of Water’ is finally here. The science-fiction epic is the sequel to Cameron’s 2009 original and expands the fictional extrasolar moon Pandora, in the Alpha Centauri System. The story puts fresh challenges before the Sully family. The earthlings of RDA (Resources Development Administration), who were sent back to earth, return in force with a sense of vengeance. The Sullys (with Jake Sully and Neytiri played by returning stars Sam Worthington and Zoe Saldana) flee to protect their Omaticaya Clan. They find themselves in Metkayina’s territory. A water-loving people, they live around a reef and have aquatic qualities.

As the old foes at the RDA return to complete what they started in the first film with a renewed sense of vengeance, Jake and Neytiri flee their homeland with their children to protect the Omaticaya clan.

The film’s ending teases an impending war that, one presumes, will be paid off in the final movie in the franchise (‘Avatar 5’, maybe?). Let’s take a deep dive into that final act.

Obviously, in case you are yet to see the movie, do that and come back.

What happens in ‘Avatar: The Way of Water’?

In ‘The Way of Water’, as mentioned above, the Sullys flee the new home of the Omaticaya Clan, inside one of those floating mountains (Hallelujah Mountains). Chasing them is none other than Colonel Miles Quaritch (Stephen Lang), the Big Bad of the original who died but left behind his stored memories. Now he lives, after a fashion, as a Recombinant, in an Avatar. Now, not only he is vengeful, he has the strength, senses, and reflexes of the Na’vi.

The Sullys make their way to home of the Metkayina. Initially unwilling and hostile, the leaders of the clan, Tonowari (Cliff Curtis) and Ronal (Kate Winslet) eventually take the fugitives in and teach them their aquatic ways. Unbeknown to them, the Sullys have brought the war right to their shores.

The Sully children—three of theirs and two adopted—make uneasy bonds with the Metkayina, many of whom deem them freaks due to their different appearance (simian tale as opposed to fin-like tail, and so on). One of Sully’s trueborn children, Britain Dalton’s Lo’ak, comes across an outcast tulkun called Payakan, a whale-like friendly aquatic mammal, and finds kinship with him—what with they being the ignored ones in their family.

Eventually Quaritch and other Recombinants find the Metkayina home (by torturing and killing the other Na’vi clan) and abduct the Sullys children. Miles Socorro (Jack Champion), one of the two adopted children of Jake and Neytiri and the only human one turns out to be the son of the Colonel. Disowning his name, he prefers to be called ‘Spider’. In a brief battle involving projectiles like bullets and arrows lead to every kid except Miles being rescued.

To draw the Sullys out, Quaritch teams up with the Pandora version of whalers (humans, of course) to kill the tulkuns. It does the trick. Lo’ak attempts to warn his tulkun friend Payakan, and his siblings and the children of Tonowari and Ronal follow. Turns out,  Payakan is the Colonel’s next target, and they all get captured.

Finally, Jake and the Colonel meet face to face. Colonel on the ship, and Jake in the air on his Mountain Banshee and all seems lost when Jake surrenders himself in exchange of his children’s safety. Suddenly, the Payakan, who was freed by the children, attacks the ship and damages it, also killing most of the crew. A fierce battle ensues in which Neteyam (Jamie Flatters), Jake and Neytiri’s eldest child, is shot and dies.

Jake and the Colonel fight beneath the sinking ship and eventually Jake comes out on top. A drowning Colonel is, however, saved by  Miles. He goes on to reject him after the rescue, however, and joins the Sullys.

What does the ending promise for the franchise as a whole?

The humans of the earth and the Pandoran Na’vi were already at loggerheads with each other even before the events of the original. Now it is going to be an all-out war. Jake and Neytiri will have to seek help of other Na’vi clans if they have to stood any chance of survival before the upcoming onslaught. Humans, on the other hand, are firmly established on Pandora and likely will be reinforced by more soldiers. Humans are clearly better armed, sporting rifles, warplanes, missiles, and other explosives, Na’vi will have to use their connection with Eywa, and the natural world, to turn the tide of war in their favour.