Home Sports Australia’s Head-scratcher – does their ‘brilliant’ No. 5 make the cut for... 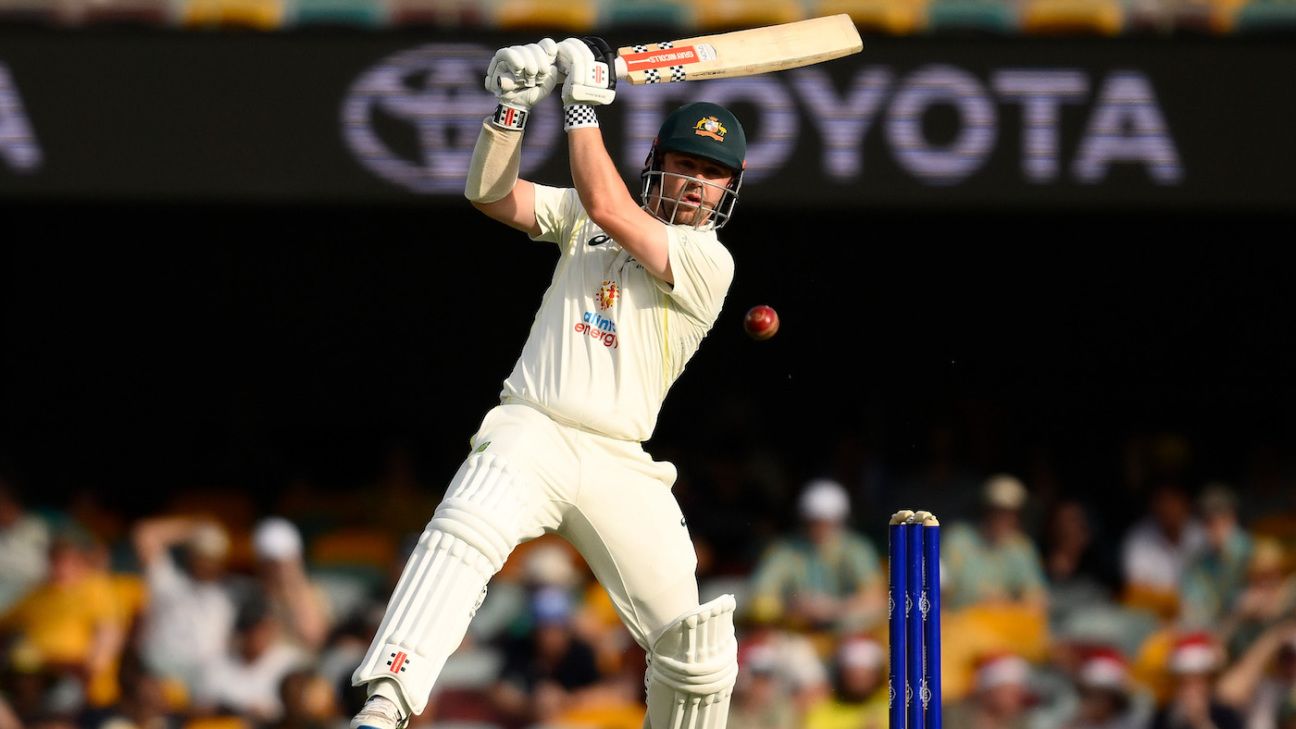 Just over 12 months ago, Travis Head was a line-ball selection in Australia’s side at No. 5. Now, he has collected back-to-back Player-of-the-Match awards and has become one of the most destructive No. 5 batters in world cricket. But despite dominating in home conditions in both last summer’s Ashes and this summer so far, Head could find himself in another selection quandary when Australia visit India in February.

It is bizarre to have a player establish himself as Head has in such a short space of time, and yet still have questions around him.

Australia have a history of having unimpeachable bedrocks in the No. 5 role, including long-time captains Allan Border, Steve Waugh and Michael Clarke.

Head has already put his name among the best Test No. 5s Australia has produced. Only 11 Australians have scored 1000 Test runs or more batting at No. 5, and it is a glittering who’s who of counter-attacking generational talents. Head has climbed above Stan McCabe, Steven Smith, Dean Jones and Kim Hughes, and sits below Border, Waugh, Clarke, Doug Walters, Michael Hussey and Keith Miller.

It’s not just the runs he has scored but the manner in which he has scored them. His fearless stroke-making is in the mould of many of those greats and his incredible scoring rate puts him in elite modern company, with only Harry Brook and Rishabh Pant scoring their Test runs quicker this year.

What he did in Brisbane against South Africa, despite not making a century, was simply staggering. He had played similar counter-attacking innings in last summer’s Ashes, once at the same ground, and the other on an equally green pitch in Hobart when Australia was 40 for 4.

But in a game where only two players reached 40, and 34 wickets fell in two days, to peel off 92 from 96 balls was truly special and he left his team-mates in awe.

“He was brilliant,” Australia captain Pat Cummins said after the win. “[We’ve] seen a few of them now against the whole flow of the game. He just goes out there and changes the game. Incredible innings. Just keeps going. Keeps applying himself every single week. Just a huge part of the team.

“Sometimes these types of wickets when the batter puts some pressure back on the bowlers, it is hard. You feel the pressure on a bowler-friendly wicket.”

“I think there are opportunities for players in the XI to play different roles at different times as well. So whether that’s the same for Travis in subcontinent tours, wait and see”

Smith echoed Cummins’ sentiments, having shared a century stand with Head on the first day, a partnership that changed the course of the game.

“He played beautifully,” Smith told Channel Seven. “He just took the game on really. It was the kind of wicket if you just sat there and tried to defend, you’re not going to last very long. So anything in his areas he went after.”

But therein lies the conundrum.

His ability to counterpunch on fast, bouncy, seaming pitches in Australia is not in question. Watching him carve the high pace and skill of Kagiso Rabada, Anrich Nortje, Marco Jansen and Lungi Ngidi off both feet through both sides of the wicket, as he did to Mark Wood and Co against England last year, suggests he should be locked in as Australia’s No. 5 for many years to come.

But watching him bat in Pakistan and Sri Lanka earlier this year was like watching a different cricketer altogether. His incredible eye and fast hands in Australia allow him to flay the ball on the rise while trusting and using the pace and bounce. But the slower, lower and spinning surfaces of the subcontinent, requiring more patience, precise footwork, and supple hands found him wanting.

Travis Head has been found wanting on the slower, lower and spinning surfaces of the subcontinent•AFP/Getty Images

In seven innings across five Tests in Pakistan and Sri Lanka, he scored just 91 runs at 15.16 and was the only one of Australia’s top seven not to make at least one half-century. In seven home Tests either side of those tours, he has 761 runs at 76.10, striking at 89.21 with three centuries and two 90s.

It leaves chairman of selectors George Bailey and his panel with a difficult proposition ahead of four Tests in India in February and March. Do they back the form horse at No.5? Do they shift him to a different spot? Or do they pick a different horse for the specific course?

“I think you have to play different conditions, at different times,” Bailey said on Sunday. “I think he [Head] has spoken to the fact he hasn’t been exposed to those conditions a great deal. And you can talk about it and try and replicate it but until you’ve actually been there and played on those types of wickets, that’s the only way, or certainly the fastest way of getting better in those conditions.

“I think the one thing that we again, this team is… Pat is driving this team to be very, very adaptable. So I think there are opportunities for players in the XI to play different roles at different times as well. So whether that’s the same for Travis in subcontinent tours, wait and see.”

Alex Malcolm is an Associate Editor at ESPNcricinfo