Home World Arsenal ‘will do everything’ to support Mead 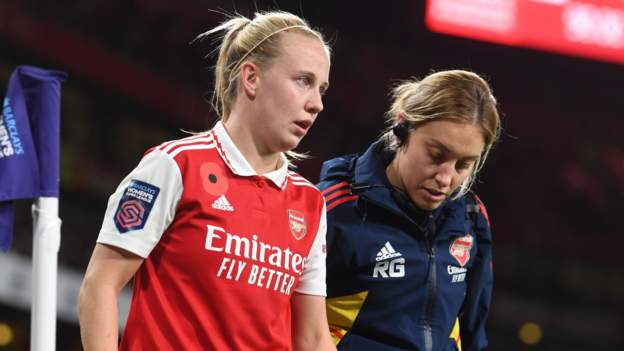 Arsenal will “do everything” to support Beth Mead following her cruciate ligament injury, says Jonas Eidevall.

The 27-year-old ruptured her ACL in the final minutes of Arsenal’s 3-2 defeat by Manchester United on Saturday.

Arsenal manager Eidevall said the club would rally round the 2022 Ballon d’Or runner-up and her team-mates would need to step up in her absence.

He said: “The team and people around the club have been very supportive, I hope Beth feels we will do everything.”

Mead helped England win Euro 2022 last summer, earning the Golden Boot and the Player of the Tournament awards. She was also voted BBC Women’s Footballer of the Year.

She has 29 goals from 50 England caps but now faces a race to be fit for the 2023 World Cup in Australia and New Zealand next summer.

With Mead, who has the third most goal contributions in the Women’s Premier League this season, now likely to be out for the campaign, Eidevall said the whole Arsenal squad would have to fill the gap.

Eidevall said: “The responsibility in a team is always shared, the team will always have an output. It is obviously on me to create that output as best as possible.”

The Gunners boss has previously spoken about the demands placed on top-level women’s footballers, but denied Mead’s workload was a major contributor to her injury at Emirates Stadium.

“It’s hard to answer because you don’t know all the variables,” he said. “Player loading and fatigue is obviously something we monitor, but if it was a factor before this game we would not have played her.”

Arsenal’s first task without Mead is to take on Juventus in the Women’s Champions League. Having won their opening two games in Group C, they lead the Italian side by two points.

Juventus are managed by former Arsenal coach Joe Montemurro, who will be facing his old team for the first time since leaving in 2021 and knows Mead well from four years together in London.

Montemurro said: “It’s a really emotional one for me, to see how Beth has gone on since I have been away is absolutely deserved and it couldn’t have happened to a better person. She’s gone to the levels that I always thought she was going to get to.

“These injuries, unfortunately I have seen a few of them in my career. We had a few at Arsenal and we had one here last year with one of our main players. They are always sad and they seem to be a bit of a hazard of the game.

“I know Beth will come back stronger, I know Beth will be chomping at the bit to get back and work hard. I can only wish her all the best because she deserves the best, as a person and as a friend.

“We grew together and joined the club at similar times and had four fabulous years together so I can only wish her all the best, she will come back stronger, no doubt.”

Arsenal suffered their first WSL defeat of the season at home to United on Saturday, and it ended a run of 14 consecutive domestic league victories.

However the Gunners have also been impressive in Europe, thumping Lyon 5-1 away in their opening women’s Champions League group stage match before defeating Zurich 3-1 at home in their last game.

Eidevall says Thursday night’s game at Allianz Stadium is the perfect opportunity to put the weekend’s loss behind them and move closer to guaranteeing a place in the knockout stages.

He said: “Football is fast in both directions, we want a totally different performance than the one against United, this is an excellent opportunity to get that right.”