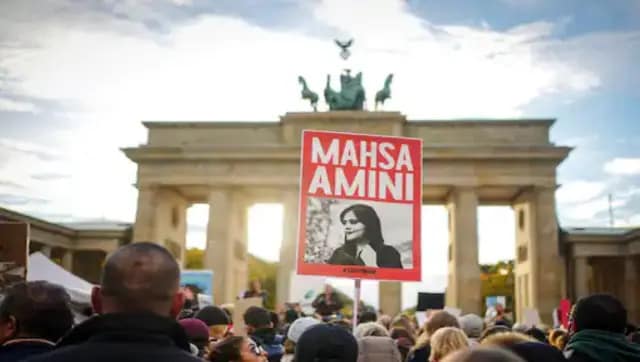 Protestors from the Iranian diaspora in Germany carry a portrait of Mahsa Amini, a 22-year-old girl who died after she was arrested by the morality police in Iran, in Berlin. AP

New Delhi: Struggling to contain the wave of protests that emerged after the death of Mahsa Amini due to torture by the morality police for not being dressed modestly enough, the Iranian regime is now confronted with Kids braving brutal repression to protest on the streets and challenging censorship online by speaking their minds freely against state repression. But the Iranian regime has a different weapon to deal with this breed of protestors; religious counselling, behavioural therapy, and psychotic drugs.

Over fifty minors (those below 18) have been so far killed in Iran in crackdowns on protests so far, according to rights groups focused on Iran.

The Iranian regime has called the protests a ‘nefarious plot’ by those against the interests of Iran. It has tried to crush the protests by using brute force resulting in the death of dozens. Teenagers have participated in these protests in large numbers and make a big number of those arrested, tortured and killed.

However, the Iranian regime has a new tool, in addition to the forceful crackdown, to deal with the new generation — those born in the later years of the 2000s, which is getting increasingly restless and assertive for their rights. Behavioural treatment to wire their thought process in a docile fashion that sees dissenting from the official line as a sin or mental disease.

According to a New York Times report, the Iranian government has issued a confidential order asking that security and intelligence officials handle all cases of protests involving children.

Around 1000 of these young protestors are in juvenile detention centres, where, in addition to physical torture to break their spirits, they are being made to undergo religious counselling and behavioural therapy to teach them that what they have done is not dissent, but sin and they must accept their wrongdoings. Those who resist this behavioural treatment are given psychotic drugs.

With these manipulations, the regime tries to accomplish two things. One, obviously pacifying the ongoing protests which seem to be spiralling out of their hands. Two, most importantly, for the long run, fix in their minds even thinking and speaking against the socio-political system as sin and illness, thus nipping the problem in the bud.

Most Iranian adults have either witnessed the 1979 Islamic revolution first-hand or have grown amongst people who have witnessed and participated in it. Their ideological moorings, even if not the same as that of the regime, are still not radical enough to warrant any special tool to deal with. But that’s not the case with the new generation. They are far removed from the revolution and its ideological milieu to have any bearing on their thoughts. They look at things afresh. To them, the response to the protests is simply a powerful state trying to gag its people devoid of any ideological reasons. So, force alone can’t be a long-term solution to make them fall in line.