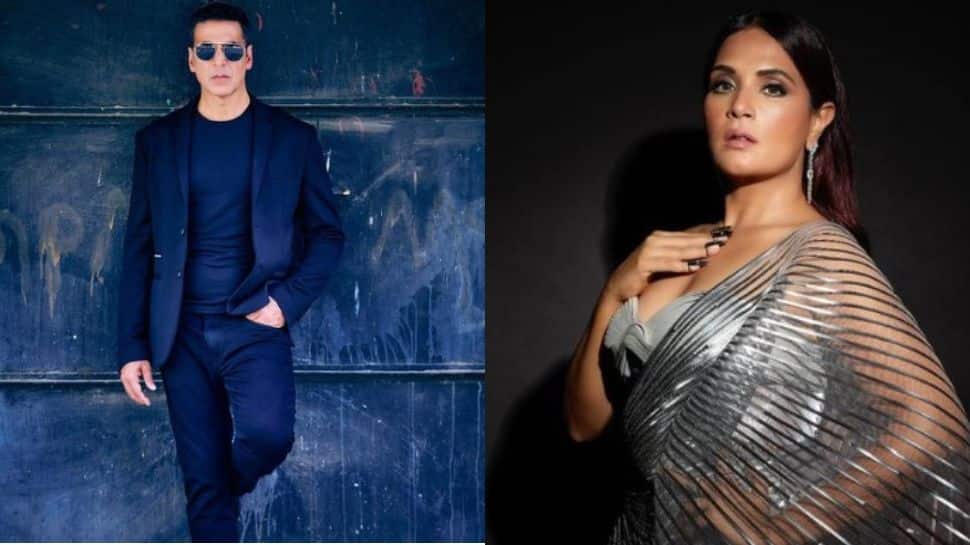 Mumbai: Akshay Kumar has condemned Richa Chadha`s comment about the 2020 Galwan clash, in which several Indian Army soldiers died. Akshay Kumar took to Twitter to call out Richa and shared a screenshot of her comment. Along with the photo, he attached his statement that read, “Hurts to see this. Nothing ever should make us ungrateful towards our armed forces. Woh hain toh aaj hum hain.”

Richa Chadha, on Wednesday, reacted to Northern Army Commander Lt General Upendra Dwivedi’s statement that the Indian Army is ready to execute any orders on taking back Pakistan-occupied Kashmir (PoK). Lt General Dwivedi`s statement was made with reference to the Defence Minister`s previous address in which he reiterated New Delhi`s resolve to take back Pakistan-occupied Kashmir (PoK), saying all refugees would get their land and homes back. Lt General Dwivedi said, “As far as the Indian Army is concerned, it will carry out any order given by the Government of India. Whenever such orders are given, we will always be ready for it.”

Hurts to see this. Nothing ever should make us ungrateful towards our armed forces. Woh hain toh aaj hum hain. pic.twitter.com/inCm392hIH

Sharing the statement, Richa took to her Twitter handle and wrote, “Galwan says hi.” As soon as she tweeted this, all hell broke loose on social media and people started to slam her for allegedly insulting the army by talking about the 2020 clash between India and China. Bharatiya Janata Party leader Manjinder Singh Sirsa has hit out at Bollywood actress Richa Chadha and demanded a police case be registered against her for her reaction to the Indian Army`s statement.

In a video statement released on Thursday, Sirsa said, “Chadha is a third-grade actress in Bollywood. She is known to post objectionable tweets against India. She is a Congress supporter and follower of Rahul Gandhi.” On Thursday, Richa issued an apology statement through a tweet. Richa wrote, “Even though it can never be my intention in the least if the 3 words which are being dragged into a controversy have offended or hurt anyone, I apologise and also say that it would sadden me if even unintentionally my words have triggered this feeling in my brothers in the Fauj of which my own Nanaji has been an illustrious part. As a Lt. Col, he took a bullet in the leg in the Indo-China war, in the 1960s. My Mamaji was a paratrooper. It`s in my blood.” She added, “A whole family is affected when their son is martyred or even injured while saving the nation which is made up of people like us and I personally know how it feels. It is an emotive issue for me.”

News Next Desk - December 6, 2022 0
The ninth and final season of 'The Flash' is all set to return on The CW. The show's new season will premiere on February...

News Next Desk - December 6, 2022 0
One of the six people facing the death penalty over the current anti-government protests in Iran has reportedly been subject to "mock executions" in...

News Next Desk - December 6, 2022 0
The Congress party has come heavily on Bihar’s famous Khan sir for an old video where he is speaking about the difference in meaning...

News Next Desk - December 6, 2022 0
Greg Auman NFC South Reporter The Baker Mayfield era of Panthers football is ending even sooner than expected.Carolina is releasing...
%d bloggers like this: