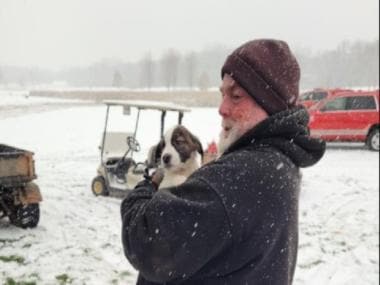 Wisconsin: An airplane carrying three people and 56 rescue dogs crashed on a golf course located in Wisconsin, the US on Tuesday. Reportedly, the twin-engine small plane crash-landed on the back green of the Western Lakes Golf Course and stopped on the third hole. The dogs onboard were headed to a shelter, the authorities said.

The outlet further quoted the local sheriff’s official as saying that the plane was ‘significantly damaged’. As the airplane descended, its wings took out several trees before coming to a stop. Over 300 gallons of fuel leaked from the wreckage, the office said. The Federal Aviation Association and the National Transportation Safety Board will be investigating the crash.

All three people and dogs survived with several sustaining minor injuries, the sheriff’s office told The Kansas City Star. They were rushed to a nearby hospital for treatment. The veterinarians, who were treating the dogs, said that they will all be placed up for adoption ‘in the coming days’.

Workers from a non-profit organization named the Humane Animal Rescue Society of Waukesha reached the site and took possession of the dogs. Further asking for donations, they took to social media handles for help.