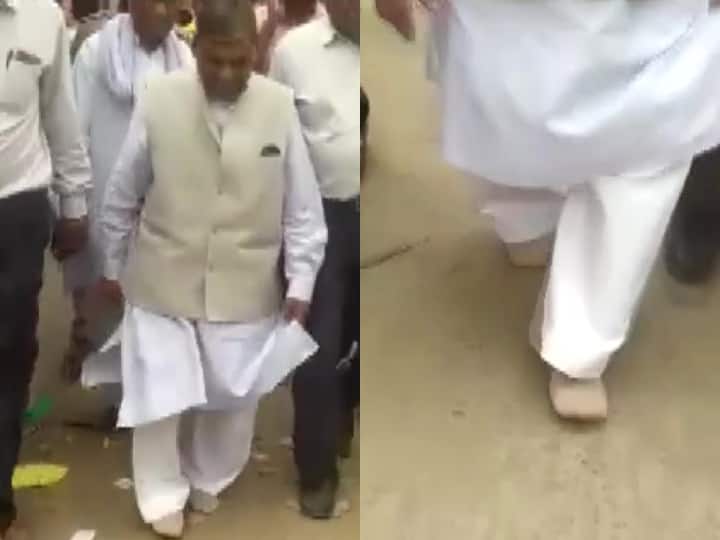 New Delhi: BJP MLA from Fatehabad Assembly Chhotelal Verma was inaugurating a fair in Agra on Friday when shoes went missing, according to ANI. He walked barefoot back to his car from the temple, when he was asked about the incident, he said that some poor man must have taken his shoes and he wished Mata Sati to do good to him and keep him happy.

According to news reports, he was in the village to inaugurate a Mata Sati fair in the temple. He took off his shoes outside the temple and had gone to the sanctum sanctorum of the temple to offer prayers but when he returned he found that his shoes were missing. This caused a stir and everyone started searching for them only for them to realise that somebody took the shoes. Then Chhote Lal Verma decided to walk barefoot towards his car.

MLA Chhotelal Verma and former MLA Dr. Rajendra Singh had reached the fair at around 3 pm to inaugurate the two-day fair to be held at the Sati temple of the village on Thursday, reports say.

“Some poor man might have worn my shoes. I wish Mata Sati to do good to that poor man and keep him happy,” he said pic.twitter.com/m52CPkNrBp

However, while sitting in the car, the minister said that taking his shoes would only benefit the poor. The video of this statement of the minister is going viral on social media.

“Some poor man might have worn my shoes. I wish Mata Sati to do good to that poor man and keep him happy,” he said.

After Abstaining From Voting Against China At UN, India Bats For Human Rights Of Uyghur Muslims

News Next Desk - October 7, 2022 0
New Delhi: Internet sensation from Tanzania, Kili Paul, who is known for lip-synching Indian songs with his sister Neema, is quite popular on social media. He...

News Next Desk - October 7, 2022 0
Chelsea defender Wesley Fofana's knee injury is not as serious as first feared and he could return in "a few weeks".Fofana, 21, limped off...

News Next Desk - October 7, 2022 0
The Delhi Police has apprehended two terror accused, including a juvenile, in connection with the May 9 RPG attack at Punjab Police headquarters in...
%d bloggers like this: