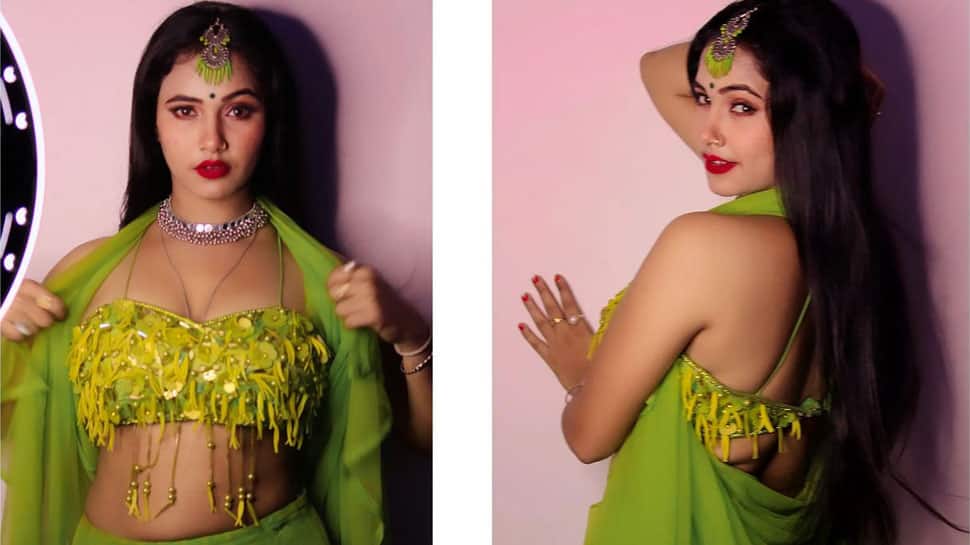 Trisha Kar Madhu Photoshoot Latest: Famous Bhojpuri actress Trisha Kar Madhu hogged attention for her alleged MMS leaked video last year. The private video with her boyfriend went viral on the internet. Later, the actress urged her fans to delete it. After the intimate video leak scandal, she did maintain a safe distance from social media briefly. She is now back with a bang and has dropped a bold photoshoot.

Bhojpuri siren Trisha Kar Madhu captioned the photo shoot post: The greatest glory in living lies not in never falling, but in rising every time we fall Pc :- @rajput_aayushman. She can be seen wearing a green choli with lehenga and dupatta wrapped over her shoulders.

Trisha has over 458K followers on Instagram so far.

Sometime back, she also released her new upcoming track titled ‘Viral Bhaiyil Facebook Pe’. The song has been sung by Rakesh Mishra and Surbhi Shivani. It features Trisha and Rakesh in the lead. The music is composed by Chhotu Rawat and Arun Bihari has penned the lyrics.

Meanwhile, after her controversial private video got leaked, Madhu even took to social media to warn those who reportedly made the video go viral. However, she did not clarify who shot the video, or how did it reach the social media platforms.

The 27-year-old actress is a native of West Bengal and made her screen debut with the Bhojpuri serial “Ham Hai Hindustani”. She has also featured in many item songs with the leading actors of the Bhojpuri film industry.

News Next Desk - December 1, 2022 0
President Volodymyr Zelensky of Ukraine asked Elon Musk to visit the country to see the damage done in the ongoing war, saying that one...

News Next Desk - December 1, 2022 0
NEW DELHI: Bollywood superstar Shah Rukh Khan is all set to make a king-sized comeback on the big screen with highly-anticipated film 'Pathaan'. The...

News Next Desk - December 1, 2022 0
It's that time of the year again when Spotify users gather beneath their favorite green app and unwrap data-based gifts, courtesy of its year-end...

News Next Desk - December 1, 2022 0
iQoo Neo 7 SE is inching towards its launch in China. Ahead of the official debut, the renders of the handset have surfaced online,...
%d bloggers like this: