Home Sports ‘After the tenth over, suddenly things are changing’ – Harmanpreet worried about... 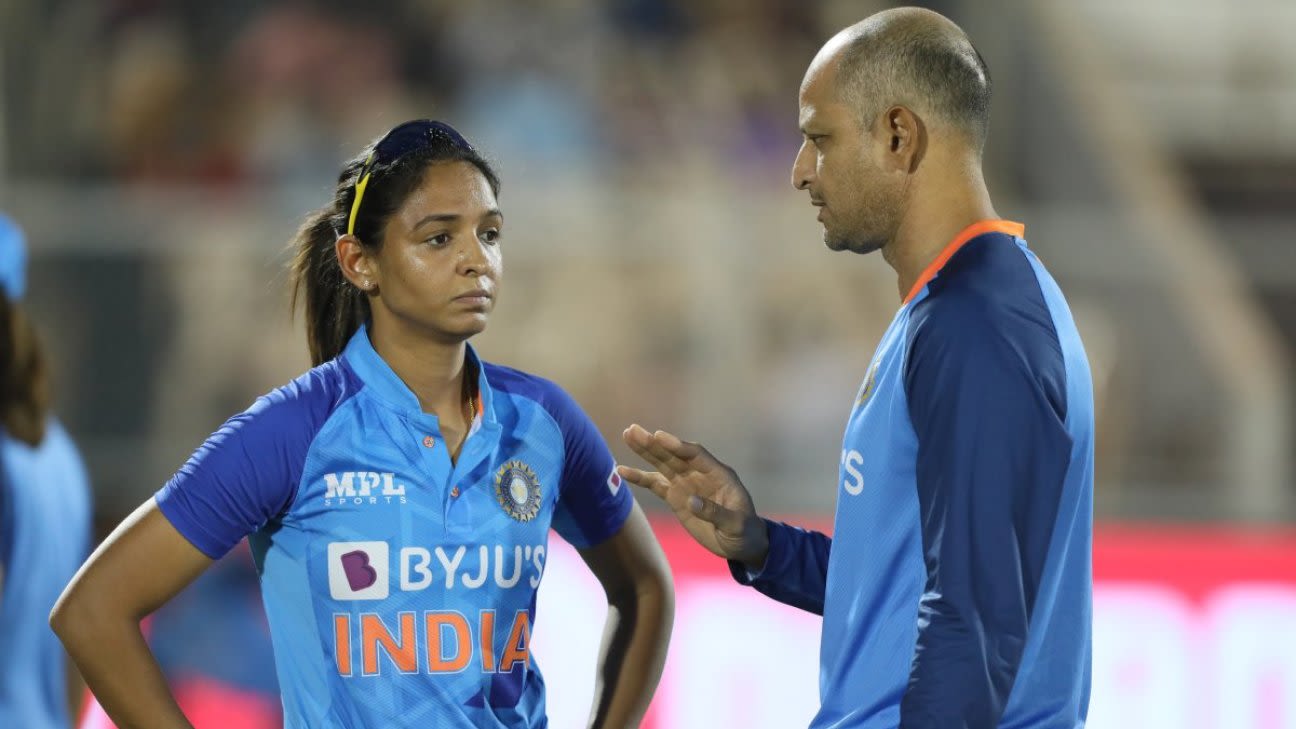 Greater depth in the seam-bowling department is key going forward, Harmanpreet Kaur said after India lost their home T20I series against Australia 4-1. Quick bowlers will come into sharp focus when India fly to South Africa for a tri-series – also featuring West Indies – next month, and then play the T20 World Cup, also in South Africa, in February.
With Pooja Vastrakar out injured, Meghna Singh, Renuka Singh and Anjali Sarvani were the main quicks in the Indian team. Renuka and Sarvani played all five games, but Meghna was dropped after conceding 41 runs in three wicketless overs across two games.
“In South Africa, seam is going to have more effect than spin bowling,” Harmanpreet pointed out after the 54-run loss in the fifth T20I on Tuesday. “That is why we started with Meghna, but sometimes the player is not able to perform as expected.

“Pooja will join the team [upon recovery], and she will fill that area. Her one or two overs are important. In this series, we had called up extra medium pacers, who we were watching closely. We are working on those, and will try to cover those areas.”

But they were without a bowling coach during the series, after Ramesh Powar – the former head coach, who also looked after the bowling – was moved to the BCCI’s National Cricket Academy. It was a high-scoring series in which Australia crossed the 170-run mark in each match. India also topped 150 in all but the last game, where they were bowled out for 142. A total of 47 sixes were hit overall – a record in a bilateral women’s T20I series – in the five games.

A pattern to emerge was that India largely kept Australia in check up to 12 overs, but lost control after that. Their economy rate in the last eight overs in the series was 12.26, compared to Australia’s 9.37.

“We will now analyse who can bowl after ten overs and in the death overs. We discussed it in team meetings, but when you are in a series, you don’t get that much time to execute those things”

“We are doing well in the first ten overs and not giving them easy runs. But after the tenth over, suddenly things are changing,” Harmanpreet said. “We did plan a lot of things, but were not able to execute them. Earlier, the first six overs was the area we wanted to improve as a team. Now we are getting results in the first six.

“We will now analyse who can bowl after ten overs and in the death overs. We discussed it in team meetings, but when you are in a series, you don’t get that much time to execute those things.”

Renuka, who has been a powerplay success story with her ability to swing the new ball, was used in the death overs against Australia. Her economy rate in that phase, where she got just one wicket, was 10.87. The most, though marginally, for Indian bowlers to have sent down a minimum of 24 balls in that period.

“[Renuka] is someone who brings in a lot of confidence to the side,” Harmanpreet said. “Whenever the team needs her, she is always ready; and we have always seen her doing well in the first six overs. She really enjoys bowling at the death, and you need a person to raise your hand and say, ‘I like to bowl in the death overs’. She is working hard on her death bowling, and is starting to get the experience now.”

With the bat, Jemimah Rodrigues, who made a comeback after being dropped earlier this year, scored just 28 runs in the first four matches. After she was dropped for the final game, Harleen Deol came in and hit 24 off 16 balls from No. 3 before being run-out.

“Harleen is someone who is always ready – be it batting at any spot or just for fielding,” Harmanpreet said. “Last match [in the fourth T20I], she did not get to bat despite being ready from the start but she was not upset, and was [instead] positive. She was like, ‘whenever I get the opportunity I want to go there and execute’.

“We all thought that we should give Jemi a break because we know how important she is. Going forward, it is important that we keep her in that frame. Batting line-up is something you cannot fix in T20s. I know Jemi was batting at No. 3 for a long time.

“But I feel if the batting line-up is flexible, that is good and then you have more options to try things. Today, that was the reason we wanted to see how Harleen can bat at No. 3. She was there, and was getting the momentum. Really happy to see her approach with the bat.”

S Sudarshanan is a sub-editor at ESPNcricinfo